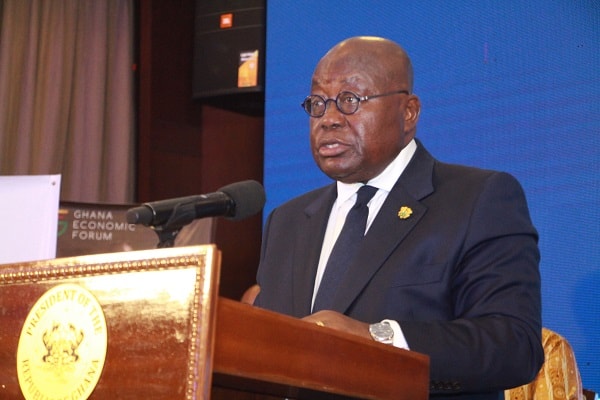 President Nana Addo Dankwa Akufo-Addo says the government is carrying out a lot of initiatives to position the country as the most business-friendly in Africa.

Consequently, he added that his administration had introduced a Business Regulatory Reform Programme with seven components aimed at improving the business atmosphere to position Ghana as the most transparent and efficiently regulated business environment on the continent.

He explained that the programme, being implemented in three years in partnership with relevant stakeholders, would place the country strategically to take maximum advantage of the African Continental Free Trade Area (AfCFTA), and strengthen its role as the host country for its secretariat.

President Akufo-Addo made the announcement when he opened the 8th Ghana Economic Forum in Accra on Wednesday and explained that the reform programme would ensure that Ghana’s position in the annual World Bank’s Doing Business ranking improves significantly.

The forum was organised by the Business and Financial Times newspaper to discuss economic issues and provide practical solutions to challenges identified. It was on the theme: “Sustaining Financial and Economic Stability – The Key Priorities”.

Explaining the seven components, President Akufo-Addo said there would be a One-Stop Registry of all business regulations, acts, legislative instruments, a Voice for All in Public Consultations, an Interactive Web Portal for public consultation and a Rolling Review of Business Regulations, using the Regulatory Guillotine principles, which is a functioning e-Registry and Consultations Portal.

The Guillotine principles prescribe that any regulation that is not justified as legal and necessary for government policy in a market economy will be eliminated, while regulations that are legal and needed but not business-friendly are made as simplified as possible.

That, the President explained, would enable ministries, departments and agencies to carry out systematically rolling reviews of regulations in order to reduce turnaround times and the cost of compliance.

He added that there would be a regulatory impact assessment and targeted regulatory relief which would grant small and medium enterprises (SMEs) at early stages of development targeted reliefs from regulatory requirements in order to stimulate higher levels of entrepreneurship and job creation.

President Akufo-Addo noted that his administration inherited a dire macro economic conditions in 2017 which included a gross domestic product (GDP) growth rate of 3.6 percent at the end of 2016, which was the lowest in over two decades, with a fiscal deficit of 9.3 percent in 2016 and an inflation rate of 15.4 percent.

That was coupled with reserves just enough to cover 2.5 months of imports as well as a banking sector which was poorly capitalised, with weak and insolvent institutions that had potentially grave consequences for the financial system.

He said after reversing those gloomy features and positioning the country on the path of growth, “My government continues to demonstrate its commitment and determination to ensuring that the habits and sins of past managers of our public finances are no longer visited on this or future generations.”

The President said if the country was to realise its Ghana Beyond Aid vision, it must change course, hence the establishment of the Presidential Fiscal Responsibility Advisory Council, the second of its kind in sub-Saharan Africa after Mauritius, to advise the President on ensuring compliance with fiscal law, rules and targets, which included a budget deficit of not more than five per cent of GDP.

He said it was the first time such a law had been enacted in the country and gave an assurance that: “I am committed to fiscal rectitude becoming an essential feature of our DNA in the management of our public finances and national economy.”

The Governor of the Bank of Ghana, Dr Ernest Addison, stated that the central bank made significant gains in stability through prudent monetary policies, as well as in regulatory and structural reforms, particularly in the banking sector.

That, he said, was key to unlocking the financial sector’s capacity to perform efficiently, with increased access to credit in support of the country’s growth agenda.

The Managing Director of Barclays Bank Ghana, Ms Abena Osei-Poku, commended President Akufo-Addo for his leadership in taking a firm decision to host the AfCFTA Secretariat in Ghana.

In response to a call for support, she said, Barclays Bank Ghana had committed to hold an annual Absa AfCFTA conference in conjunction with the secretariat and the Office of the President, saying, “We have deep insight and understanding of the African continent and we intend to use this expertise to drive and stimulate the right engagements between governments and the private sector.”