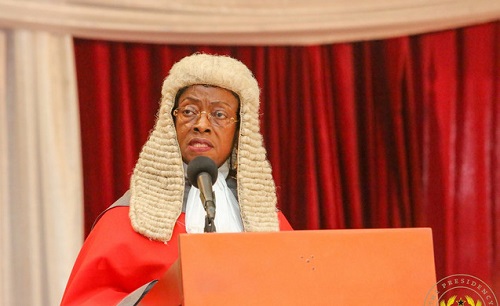 The Chief Justice, Madam Sophia Akuffo, has said that the new Companies Act 2019 will transform the business environment in Ghana and ensure that the country climbs up on World Bank’s ladder of the doing business.

Commenting at an event organized by the Ghana Association of Restructuring and Insolvency Advisors (GARIA) in Accra, Mad Akuffo rued retrogression the country has made in the World Bank ease of doing business by dropping four steps to fall on the 118th position, largely due to factors that bothers on the work of the judiciary; adding that, neighbouring countries such as Togo and Nigeria have improved on the ranking due to transformation in their judiciary process.

The Chief Justice feels the new companies’ law will address lapses in the country’s judiciary process that will improve the business climate and eventually lead to an improved position of the World Bank doing business table.

“With regard to the indicators [World Bank Doing Business] that the judiciary is involved in, namely: enforcing contracts; resolving insolvency; protecting minority investors, Ghana’s scores had remained static. In contrast, jurisdictions such as Togo and Nigeria have advanced their ranking quite significantly.

I am informed that Nigeria improved up on the enforcement of contract indicator by enhancing the quality of its judicial process. It is evident therefore how significant the role of a revised and modernized companies’ law is to our country’s ease of doing business.

Company legislation is key to creating a conducive environment for business in any country. It provides the framework within which companies are formed and financed, operated and managed for the benefit of the various categories of stakeholders of the economy as a whole; it governs the right relationship and conduct of stakeholders,” she said.

The new Companies Act has, among other things, also separated the duties of the Registrar of Companies from the Registrar General’s Department (RGD) in a bid to facilitate business operations and improve quality of service.

Under the old Companies Law, the RGD was responsible for the registration of companies, partnerships, business names, marriages, adoptions, property rights, among others, which overburdened it to deliver quality services. However, with the hive off, the RGD now will focus on all other duties and leave anything related to business operations to the Registrar of Companies to handle.

The new Act, also has corporate governance requirements which dictates how a company should be owned, managed, and run with increased responsibility on directors and company secretaries to ensure that companies comply with the rules of the game or risk being banned or imprisoned.

Despite these changes, Ms. Akuffo maintains that a lack of effective and efficient judiciary process will promote corruption and still erode any gains the new law will bring.

“An effective and efficient justice system which ensures that disputes are resolved in a quality manner, i.e., structured and orderly, fosters economic stability and growth in a number of importance ways. It fosters respect for property rights; guarantees contract enforcement; promotes predictability in the application of the normative framework.