‘1D1F is to make Ghana an export-oriented country’ 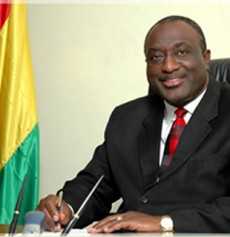 The Minister of Trade and Industry, Mr. Alan Kyerematen, has explained that one of the government’s flagship programmes, One district, One factory (1D1F), is to make Ghana an export-oriented country to cut down on the importation of certain items that can be manufactured locally.

He said the industrialisation agenda of the government through the 1D1F initiative would also help create jobs for the youth.

Mr. Kyerematen stated this when he  presented a status report on the 1D1F programme, titled “Assessment of 1D1F status of implementation”,  at the two-day National Policy Summit (NPS) in Tamale in the Northern Region last Monday.

He said Ghana could not afford to be a producer of raw materials, without adding value to them to earn more foreign exchange to change the face of the economy from import to export led.

Mr. Kyerematen also used the occasion to dispel the notion that under the 1D1F initiative the government was going to build factories in all districts across the country.

Rather, he indicated, the government was to offer incentives to support the private sector to establish those factories.

“When we talk about 1D1F, it does not mean the government is going to establish state enterprises. The initiative requires the participation of business people to make it work. It is supposed to be a partnership between the government and the private sector,” he further explained.

Mr. Kyerematen said over 700 business proposals on the 1D1F that were received last year were at various stages of consideration, while others had received approval to set off.

He said a tricycle (Motorking) company in Tamale that had been certified and designated as a 1D1F initiative could now expand its operations to include the assembling of agricultural and farming machinery and equipment to employ more people.

“A factory in Kumasi that produces bolts and nuts and springs used by articulated trucks has also been commissioned under the 1D1F.

“There are at least 15 companies that are now operational and getting support from the government to expand,” he added.