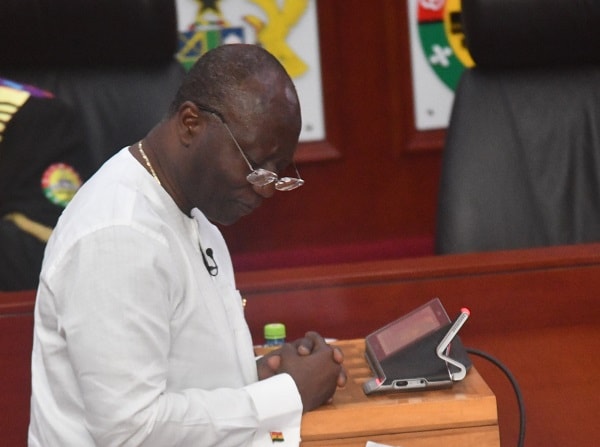 The government is to spend more to deliver infrastructure projects such as roads, schools and hospitals in 2020 than it has done in any of the past three years.

In the 2020 budget, which was presented on Wednesday, the government projects to spend GH¢9.3 billion, equivalent to 2.3 percent of GDP on selected infrastructure projects across the country next year.

“The projected amount is 53.5 percent higher than the 2019 projected outturn, which was GH¢7.7 billion, the Minister of Finance, Mr Ken Ofori-Atta, announced this to Parliament  when he presented the 2020 Budget and Economic Statement.

He said of the amount, domestic financed capital expenditure was estimated at GH¢3.8 billion (0.9 percent of GDP).

“The remaining GH¢5.5 billion is expected to be financed from foreign resources, comprising a combination of project grants and loans, Mr Ofori-Atta said.

On the theme: “Consolidating the gains for growth, jobs and prosperity for all,” the 2019 budget is the government’s fourth and the country’s second revenue and expenditure estimation instrument after the exit of the extended credit facility of the International Monetary Fund (IMF).

To accelerate the delivery of basic infrastructure needs of each constituency, Mr Ofori-Atta said a number of varying infrastructure projects such as culverts, small bridges, community centres, police posts, classroom blocks, markets, among others would commence in 2020.

“These basic infrastructural facilities will help to improve the lives of the rural and peri-urban population.”

Also in the 152-page speech, the minister said the development of a modern railway system remained a high priority of the government to facilitate the efficient and effective movement of both passengers and cargo.

To this end, he said the government had since 2017 adopted the dual strategy of rehabilitating sections of the old narrow gauge line as well as constructing a new modern standard gauge line.

“The works so far cover the Accra-Tema suburban line, which has been operating since January 2019 and the Kojokrom-Tarkwa as well as the Achimota- Nsawam lines. In 2020, work will also commence on the Nsawam-Koforidua line,” he said.

He indicated that the government would continue to support the rehabilitation of sections of the narrow gauge.

Mr Ofori-Atta said all over the world, infrastructure development had been the bedrock for economic development and an avenue for wealth creation.

Over the last three years, he said, the government had focused on road and rail sector development, the development of fish landing sites, expansion of water and sanitation systems and the delivery of the Infrastructure for Poverty Eradication Programme (IPEP) which sought to promote inclusive development of all parts of the country.

The minister stated that COCOBOD had also secured funds to continue with ongoing and new cocoa roads across the country.

“Work on these roads will also commence soon.”

He stated that as part of the government’s new initiative to complement the traditional execution of road projects, it had launched the Accelerated Community Road Improvement Initiative.

Just this month, he said the Ministry of Finance released funds to the 48 Engineers Regiment of the Ghana Armed Forces, who are busy working on some roads in communities in Greater Accra.

The Year of Roads

Mr Ofori-Atta said the government had also been able to mobilise the financing for over 150 roads nationwide.

“Ghanaians want action on our roads, not words or plans or Green Book claims about what has been done. We intend to swing into action and let our work do the talking for us.

“With this large number of roads to be constructed, the year 2020 can aptly be described as The Year of Roads along with a focus on all our flagship programmes,” he said.

He stated that as part of the government’s quest to reduce regional disparities and bring service closer to the people, it will complete various projects in 2020.