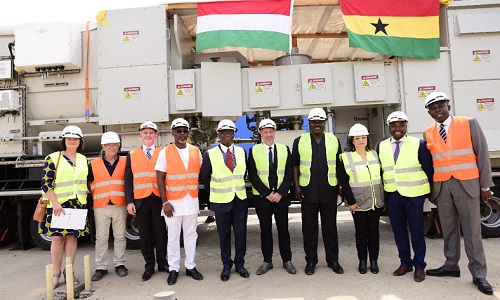 The 400MW Bridge Power project being built in Tema will be ready by September this year, according to its three investor institutions known together as the Early Power Consortium.

The consortium, made up of Endeavor Energy, General Electric and local trading concern, Sage, announced this at the project site when it took delivery of five turbines toward completing the project.

Three of the five GE aeroderivative TM2500 turbines were built in Hungary, which is supporting the first stage of the project with investment worth US$70million. The remaining two turbines are from the USA.

Bridge Power has a Power Purchase Agreement (PPA) with the Electricity Company of Ghana for a term of 20 years, with an option to extend for five more years.

The project, according to its developers, will enhance Ghana’s energy security as the plant is capable of being fuelled by Liquified Petroleum Gas (LPG), natural gas or diesel, and will be responsible for importing its own fuel.

Managing Director of Endeavor Energy, Mr. Steve Jernigan said: “We expect to deliver first power by the end of this year, and we are thrilled at the prospect of significantly helping to power Ghana’s homes, schools, offices, hospitals, and industries. In the process, we will create jobs, transfer skills, and add to Ghana’s energy infrastructure”.

Phase-one of the project will use five GE TM2500 gas turbines and one purpose-built GE steam turbine in a combined cycle gas (CCGT) configuration that will collectively generate 202MW of power.

Stage two will add more than 200MW through four GE LM6000 gas turbines and one purpose-built GE steam turbine, in a CCGT configuration.

Construction work on the project started in 2017 and is expected to be completed by September this year.

“The ‘Ghana Beyond Aid’ agenda set by President Nana Akufo-Addo can only be achieved by diversifying the economy toward manufacturing and agro-processing that will create reliable and stable jobs for our unemployed youth for resilient growth. These ambitious dreams of ours can only be achieved with adequate and reliable power,” said Deputy Minister of Trade and Industry,  Mr. Robert Ahomka-Lindsay.