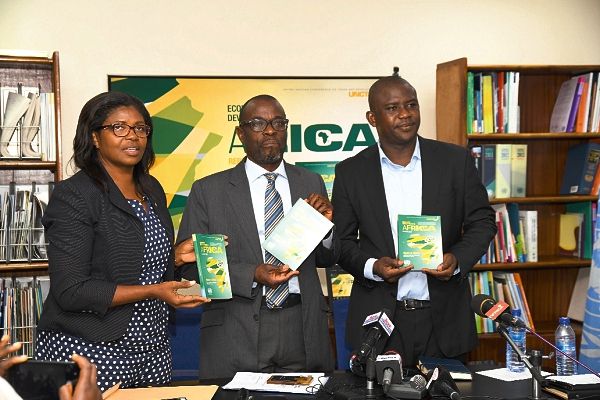 The United Nations Conference on Trade and Development (UNCTAD) has asked African countries to remove trade barriers from the continent, in fulfilment of the African Continental Free Trade Area (AfCFTA) agreement onto which they signed in May this year.

In its latest Economic Development in Africa (EDA) Report, UNCTAD said it was important for African countries to set out ground rules to determine the origin of products within the continent because failure to do so could affect the smooth implementation of the agreement.

The report, which was launched at the United Nations (UN) Information Centre in Accra yesterday, revealed that trade among African countries was only 15.2 per cent, while over 80 per cent of commodities from Africa were exported to Europe, Asia and other markets.

According to the report, the trend could only be improved through the deepening of engagements to determine the origin of products, building the capacity of the continent’s human resource, diversifying African economies to focus on manufacturing and addressing trade-related challenges.

In 2000, UNCTAD launched the annual EDA Report which focused on key development challenges on the African continent and suggested ways of dealing with those bottlenecks.

In 2015, the EDA Report looked at the telecommunications sector and how it could be leveraged for development, while the 2016 edition focused on development finance in Africa, with specific emphasis on illicit finance flow.

The 2017 and the 2018 reports also delved into tourism for transformation and migration, respectively.

The 2019 Report, dubbed: “Made in Africa: Rules of origin for enhanced inter-African trade”, explores the possibility of establishing better rules of origin and also explains the criteria for determining the nationality of products to promote trade among African countries.

The rules of origin are meant to ascertain the origin of goods, prevent trade deflection and encourage the use of local inputs and production within a free trade area.

The 2019 Report further highlights challenges such as weak productive capacities and tariff-related trade costs as key challenges that ought to be addressed to improve trade on the continent.

It further shows that the share of African exports to the rest of the world ranges from 80 to 90 per cent, while intra-African exports account for only 16.6 per cent.

Additionally, intra-African trade, defined as the average of intra-African exports and imports, is around 15.2 per cent, while comparative figures for America, Asia, Europe and Oceania are 47, 61, 67 and seven per cent, respectively.

The Managing Director of Circadian Consulting Limited, a real estate entity, Mr Philip Cobbina, who presented details of the report, said its release was timely, especially during the AfCFTA negotiations.

He stressed that if priority was placed on establishing rules of origin of products in Africa, it could be the game changer in promoting trade among African countries.

“What we need to do is build the base of our manufacturing sector to use the resources that we have within the continent and also take advantage of the intermediate products,” he said.

He further observed that the inability of African countries to trade among themselves meant that the potential that could be leveraged to boost local economies and build a stronger continent had been undermined.

He, therefore, called on African countries to inter-connect and set rules of origin that would be holistic enough to break trade barriers, especially within regional groupings.

On the way forward, Mr Cobbina underscored the need for policy makers in African countries to focus on building the capacity of the human resource to take control of the manufacturing, oil and gas sectors.