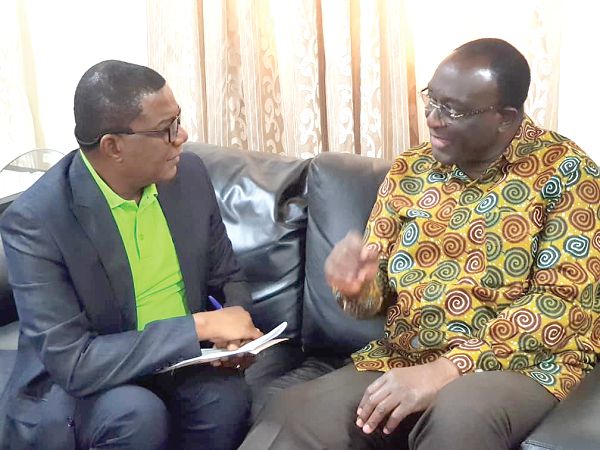 Ghana has been selected among six other countries which submitted bids to host the African Continental Free Trade Agreement (AfCFTA) Secretariat.

The countries are Ethiopia, Kenya, Senegal, Egypt, E-Swatini and Madagascar. In the final stages, Senegal, Ethiopia and Egypt withdrew their bids in favour of Ghana.

Since Ghana’s selection, there have been different interpretations and understanding of what the AfCFTA is all about.

The Political Editor of the Daily Graphic, Mr Kobby Asmah, last Friday elicited the views of the Minister of Trade and Industry, Mr Alan Kwadwo Kyerematen, on the benefits of AfCFTA and Ghana’s selection as the host country for the AfCFTA Secretariat.

In spite of Ghana’s pioneering role in the struggle for independence in Africa and subsequent contributions to the integration of the African continent, Ghana has not had the honour and privilege of hosting any African Union (AU) organ.

The decision for Ghana to host the AfCFTA Secretariat is, therefore, a historic one, says Mr Kyerematen.
Below are excerpts of the interview.

Kobby Asmah
What has necessitated the creation of the AfCFTA?

Alan Kyerematen
The creation of a single continental market for Africa had long been the dream of the founding fathers of most of the major countries in our continent.

The Abuja Declaration of 1991 of the Authority of Heads of State of the Organisation of African Unity envisioned the establishment of an African economic community.

One of the building blocs for the establishment of this community was the creation of a Continental Free Trade Area for Africa.

The realisation of the vision of a single market did not materialise until the AU Summit of Heads of State and Government in January 2012, which formally endorsed the decision to establish an African Continental Free Trade Area.

Since that decision was adopted, extensive preparations and negotiations were carried out by member states, finally culminating in the historic AU Summit decision in Kigali on March 21, 2018 to formally conclude the first phase of negotiations for the Continental Free Trade Agreement.

Kobby Asmah
What really is AfCFTA?

The AfCFTA is a single-market (duty-free, quota-free) trading bloc covering the entire African Continent with a total population of 1.2 billion and a combined Gross Domestic Product (GDP) of almost USD 3 trillion.

The AfCFTA is the most significant development in Africa since the establishment of the Organisation of African Unity (OAU) in 1963. It is the world’s largest free-trade area, second only to the World Trade Organisation (WTO) in terms of the number of member states.

Kobby Asmah
Can you shed some light on the operational phase of the AfCFTA?

Alan Kyerematen
With the coming into force of the AfCFTA, the operational phase of the agreement was formally launched on July 7, 2019 at the AU Summit in Niamey, Niger.

The critical elements of the operational phase are the adoption of an agreed set of Rules of Origin and launching of key AfCFTA Operational Instruments, including the online platform for Tariff Negotiations, the Africa Trade Observatory (ATO), the Digital Payment and Settlement Systems (AFREXIM Bank), the Online Mechanism Reporting and Monitoring for Non-Tariff Barriers, the Mobile Application for AfCFTA business activities, the MANSA Repository Platform to serve as a centralised database for customer due diligence and the US$1 billion AfCFTA Adjustment Facility to manage the adverse effects of revenue losses for selected countries.

The other elements include the setting up of a permanent secretariat in Accra to be completed by March 30, 2020.

Kobby Asmah
Are there benefits to be derived by Ghana?

Alan Kyerematen
Ghana can and should leverage the opportunity of hosting the AfCFTA Secretariat to become the new commercial capital of Africa, a regional trade hub and economic epicentre and the new gateway to the continent.

The hosting of the secretariat will promote Ghana as an attractive investment destination and actively facilitate foreign direct investments into Ghana.

The AfCFTA Headquarters will also attract major international financial institutions to locate in Ghana. Other international companies doing business in Africa are likely to consider Ghana as the preferred location for siting their corporate headquarters.

Kobby Asmah
How is Ghana positioning itself to harness the benefits of  AfCFTA?

Alan Kyerematen
Ghana has already started implementing a comprehensive agenda for industrial transformation which is in line with the Boosting Intra-African Trade (BIAT) Programme of Action, in readiness to take advantage of the AfCFTA.

Some of the interventions currently being pursued by the government under the BIAT priority clusters are, enhancing Industrial Productive Capacity – One district, One factory (1D1F) initiative, Strategic Anchor Industries Initiative, One region, One park (Industrial Parks & Special Economic Zones), SME Development and promotion of standards.

Others, he said, were trade facilitation – Customs Management Reforms, including Single Window Platform and implementation of the WTO Trade Facilitation Agreement.
He said trade-related infrastructure, including  the Tema and Takoradi port expansion projects, roads, airports and railways were also underway.

Kobby Asmah
How many countries have signed the AfCFTA?

Alan Kyerematen
Currently, 54 out of 55 countries in Africa have so far signed the AfCFTA, with 27 countries having ratified the agreement.

Kobby Asmah
Could you tabulate some of the benefits of AfCFTA?

Alan Kyerematen
There are many benefits that Africa will derive from implementing the AfCFTA, including an increase in Intra-African trade through better harmonisation and coordination of trade within the African continent.

It is estimated that Intra-African trade will increase by as much as $35 billion per annum or 52 per cent by 2022.

It will also address the challenge of small fragmented markets in Africa by creating a single continental market which will lead to economies of scale and add value to Africa’s abundant natural resources and promote economic diversification and industrialisation.

Furthermore, he said,  it would develop regional value chains and facilitate cross-border investments in Africa and enhance access to an expanded market for SMEs in Africa on preferential trade terms.

Additionally, the AfCFTA, he said, would attract Foreign Direct Investments (FDI) into Africa with strong regional and local content and facilitate the integration of Africa economies into global markets.

Kobby Asmah
Will you say hosting of AfCTFA will make an impact on Ghana?

Alan Kyerematen
There could not have been a better time than now for Ghana to be hosting the secretariat of AfCFTA, particularly at a time when Africa is rising and Ghana is rising.

The hosting of the AfCFTA Secretariat is going to be a game changer and a launch pad for Ghana’s private sector to explore and exploit business opportunities in Africa.

It is without a doubt an important major step in Ghana’s march towards economic prosperity and requires the support of all Ghanaians.