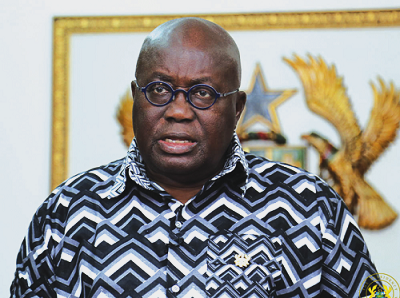 President Nana Addo Dankwa Akufo-Addo has stated that there is ample evidence to show that the economic transformation and rapid development that Africa yearns for cannot be achieved through aid.

He said to achieve accelerated development, African nations must effectively harness their resources and deploy them creatively and efficiently for rapid economic and social transformation.

That, he said, was necessary because even if there was no aid fatigue, there was never going to be enough aid to develop Ghana, let alone Africa, to desired levels.

President Akufo-Addo was addressing the opening session of an African Caucus meeting of Finance Ministers, Central Bank Governors and African Governors of the World Bank and the International Monetary Fund (IMF) from 48 African countries in Accra yesterday.

The two-day meeting is on the theme: “Africa beyond aid: Enhancing institutional capacity and innovative financing for sustainable growth”.

Using Ghana’s recent collaboration with Cote d’Ivoire as an example, the President said the two countries had forged a strategic partnership to defend the collective interests of cocoa farmers and also collaborate in the development of the economies of the two countries and, therefore, urged other countries to emulate their example.

According to him, Africa had an annual infrastructure financing gap of $100 billion, which he noted was holding the continent back by two percentage points in Gross Domestic Product (GDP) growth per capita a year.

He said granted that it must attract external resources to help fill the gap, Africa must still take the lead role in generating the resources, set the priorities and let the external partners, private or public, follow.

President Akufo-Addo reiterated Africa’s ironic situation of being first or second in holding the world’s reserves of bauxite, chromite, cobalt, industrial diamonds, among other resources, as well as 30 per cent of the earth’s remaining minerals, and yet was poor.

He added that Africa was also an emerging key player in the world production of coal, oil and gas and yet most of those resources were exported in their raw form, thereby denying the continent its fair share of the values of those resources.

The President attributed those lapses to poorly designed contracts and illicit financial flows which culminated in billions of dollars siphoned out of the continent each year and called for the building of the capacities of state institutions to guard against those practices.

The President, who is widely credited with promoting the vision of “Ghana Beyond Aid”, explained that in advocating the initiative, he was not suggesting that “we thumb our noses at those who have helped us and continue to do so”.

He said he was aware that African Governors of the World Bank and the International Development Association (IDA) were working to ensure that Africa secured $100 billion for IDA -19, a fund from which they could secure concessionary financing, a significant increase over the $75 billion realised under IDA -18.

He said although Africa aimed at developing beyond aid, the journey towards that goal would be much faster with enhanced support from the Bretton Woods partners and additional resources from the IDA, while other initiatives that reflected innovative forms of financing would complement efforts at maximising domestic revenue mobilisation to enable Africa to bridge the enormous financing gap in infrastructure.

“Such a development will help eradicate the perception that the IMF, for example, is heavily skewed in its assistance towards members of the European Union and thereby help establish the balance that official global institutions must attain in the interest of fairness and equity,” President Akufo-Addo added.

The Minister of Finance, Mr Ken Ofori-Atta, who is the Chairman of the Africa Caucus, called for a common position to advance the interests of Africa.

He said the meeting would discuss the programmes and institutions required to make Africa Beyond Aid a reality and also focus on how to mobilise the Bretton Wood institutions — the World Bank and the IMF — to provide more support for Africa in pursuit of the vision.