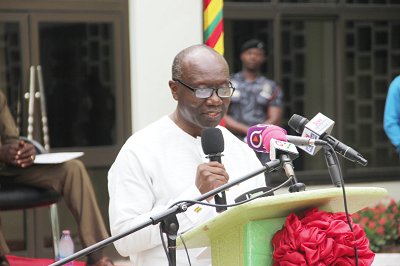 The Minister of Finance, Mr Ken Ofori-Atta, has given an assurance that agriculture will continue to receive the priority attention it deserves to propel the country to the dizzying heights of prosperity.

He said that was because farmers were the government’s biggest and most important constituents in the quest to achieve the goal of transforming Ghana’s economy through agriculture.

Launching the 35th National Farmers Day, to be held in Ho on Friday, December 6, 2019, the minister said the government had done more than enough to show its commitment to the development of agriculture, adding that agriculture would remain one of the government’s priorities, given its contribution to the economy.

The National Farmers Day, to be jointly organised by the Ministry of Food and Agriculture, the Ministry of Fisheries and Aquaculture Development and the Ghana Cocoa Board, will be on the theme: “Enhancing small-scale agriculture towards agribusiness and development”.

One unique feature of this year’s celebration will be the organisation of regional durbars, beginning on December 2 and climaxing on December 6, 2019.

All the 16 regions will be made to mount exhibitions, and each day four regions will hold durbars to exhibit their diversity in culture and ecological zone crops.

The National Farmers Day has been set aside to honour farmers, motivate and assure them of the country’s continued appreciation and support.

Mr Ofori-Atta stressed that the agricultural sector had been the backbone of Ghana’s economy and it remained the fastest-growing industry.

“This is telling and indicative that something significant and exciting is happening on the agricultural front,” he said.

The Minister of Finance indicated that over the years, sponsors and development partners had kept faith with the government as true allies in development by generously contributing to the success of farmers days and making them worthy commemorative events.

He thanked previous sponsors and “those of you who have shown up once again to strongly signal your noble intention of partnering the government to deservingly honour and celebrate our farmers”.

“I invite you all, therefore, to join the government, through generous support, either in cash or in kind, to make this year’s celebration a memorable and successful one.

“I wish to sound the rallying call to all well-meaning Ghanaians and key stakeholders in agriculture to mobilise and practically demonstrate support towards this year’s celebration,” Mr Ofori-Atta courted Ghanaians.

He expressed appreciation to President Nana Addo Dankwa Akufo-Addo for his strong leadership, as well as the tireless efforts of the sector Minister, Dr Owusu Afriyie Akoto, through whose various interventions and initiatives “we are today witnessing a vibrant agricultural sector, energised by massive investments into the government’s flagship programme, Planting for Food and Jobs”.

Welcoming the stakeholders, Dr Akoto said the theme was carefully selected to reflect the focus and priority of the ministry in the pursuit of the government’s transformational agenda for agriculture.

He said the focus of the ministry reinforced the country’s commitment to the development of agriculture through innovative policies and strategies.

“There is the need to do far more for farmers and agriculture in general if the goal of transformation is to be achieved,” he said.

The Deputy Minister of Fisheries and Aquaculture Development, Mr Francis Kingsley Ato Cudjoe, called for a paradigm shift from the subsistence and supply-driven approach to agriculture to a business-centred and demand-driven approach.

“We foresee an agricultural sector that will not only produce for household consumption but is also capable of promoting agro-industrial entrepreneurs to serve as the basis for improving employment, household incomes, rural development, as well as national food security,” he said.

A Minister of State in charge of Livestock at the Ministry of Agriculture, Dr Nurah Gyielleh, who is the Chairman of the Planning Committee of the Farmers Day, announced that there were five categories for interested sponsors to consider — the Platinum Group, which comes with GHc100,000 and above; the Gold, which is between GHc75,00 and GHc99,000; the Silver, which ranges between GHc50,000 and GHc74,000, and the Bronze, which falls within GHc20,000 and GHc49,000 and others.

He appealed to corporate Ghana to generously support the celebration by contributing to ensure a unique Farmers Day celebration.