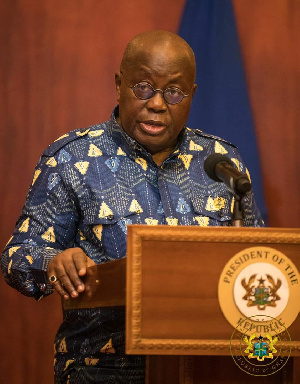 The President, Nana Addo Dankwa Akufo-Addo yesterday cut the tape in two communities at separate ceremonies to mark the inauguration of water projects which are aimed at providing potable water to some communities across the Central Region.

The project, undertaken by the Community Water and Sanitation Agency (CWSA) has increased water coverage for the region from 63.8 per cent to 70.04 per cent.

About 184, 000 people in 146 communities across eight districts in the Central Region are benefiting from the project under the Sustainable Rural Water and Sanitation project.”

Costing GH¢73.4 million, the project was financed with funding from the World Bank and covers areas in saline belt due to problem with ground water.

The CWSA had grouped the beneficiary communities into nine clusters for efficient and effective management of the various systems.

President Akufo-Addo who indicated the government’s commitment in improving access to potable water in the country called for support from Ghanaians in the execution of the policies and programmes that would lead to the transformation of the nation.

The Ministry of Water Resources and Sanitation, the President said, had awarded contracts that would facilitate the construction of 645 mechanised boreholes across the country.

He urged the business community and investors to take a leaf from the government’s flagship projects such as the One-District-One-Factory initiative by considering an investment in the beneficiary communities.

Additionally, he urged them to sustain the fight against spread of the coronavirus (COVID-19) pandemic by adhering to established protocols.

The President urged residents in the beneficiary communities to take advantage of employment opportunities that comes with the provision of the facility.

At Awutu Senya West, President Akufo-Addo gave an assurance of the commitment of the government to construct a Community-based Health Planning and Services (CHPS) compound for the Jeikrodua community.

He said the Awutu Senya West District had been selected as one of the districts to benefit from the 88 district hospitals that the government would be constructing in the country.

The Minister of Sanitation and Water Resources, Madam Cecilia Dapaah, in her address, explained that, access to potable water was critical in the nation’s development agenda and said, the commissioning of the water project in the beneficiary communities would ease the burden of women and children in walking long distances to access potable water.

She gave an assurance of the government’s determination in improving access to potable water in the country in line with the Sustainable Development Goals.

The Central Regional Minister, Kwamena Duncan, expressed the region’s gratitude to the President for the numerous development projects that had so far been executed in the region.

He said, with the execution of the water system in the area, residents would not have the burden of struggling for water, which, he said, continued to slow down economic activities in the area.

The Chief Executive Officer of the Community Water and Sanitation Agency (CWSA), Worlanyo Siabi, indicated that, the agency would continue to work in the interest of Ghanaians at all times with particular reference to provision of quality water.

He said more employment opportunities had been created as part of reforms embarked by the board and management of the CWSA.

Residents in the beneficiary communities expressed appreciation to the government for its role in providing infrastructural development in the country.