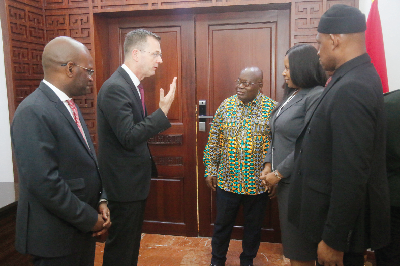 President Nana Addo Dankwa Akufo-Addo has called on the International Finance Corporation (IFC) to support the government and the Bank of Ghana to bring double-digit interest rates down to a single digit to help prop up the private sector of the country.

He said the entrepreneurial capacities and capabilities of Ghanaians had never been in doubt, but that it was the biting effects of high interest rates charged by the local banks that were impeding their growth and the attainment of the industrialisation agenda of the country.

President Akufo-Addo made the call when the Vice-President, Middle East and Africa of the IFC, Mr Sergio Pimenta, paid a courtesy call on him at the Jubilee House in Accra yesterday.

Currently, the 182-day treasury bill rate, which is part of factors used in determining the effective interest rate of banks, averages 15.2 per cent, the same as the average rate at which banks lend among themselves within a week.

The World Bank Group has set two goals for the world to achieve by 2030: end extreme poverty and promote shared prosperity in every country, with a greater role reserved for the private sector.

President Akufo-Addo said the government had been looking at ways to get local and international support for the banking sector, so that it would be able to deal with high double-digit interest rates.

He said the Ghanaian private sector was looking for eight per cent interest rate at most and expressed the hope that an organisation such as the IFC, with its experiences across the globe, should be able to play a role in that direction.

The President stated that the entrepreneurial capacities and capabilities of the Ghanaian were well established and known but where to turn to for between $50,000 and $200,000 initial capital, at a single-digit interest rate, was the problem.

He said microfinance institutions that supported industries were taking “not just an arm and a leg but both arms and both legs” from the entrepreneur in terms of interest rates.

He said one of the single most decisive breakthroughs for the economy would be to bring interest rates to accessible levels for both agricultural and industrial development and noted that he was aware that agricultural financing was considered risky, but that once others had found solutions, it should be possible for Ghana to do likewise.
He urged the IFC officials in Ghana and the visiting Vice-President to focus on and champion the issues he had raised.

President Akufo-Addo said the government had made gains in the last 18 months by sanitising and strengthening the banking sector.
He pointed out that in the past, the banks were weak, fragile and incapable of putting together any significant amount of money for anybody.

The President noted that the vision of the IFC to assist Ghana was in line with the government’s agenda to develop and grow the economy, especially resolving socio-economic matters such as job creation, agricultural development, skills enhancement, manufacturing, industrialisation, free access to secondary education and preparing the workforce for the 21st century.

Mr Pimenta, for his part, commended the government for winning the bid to host the secretariat of the African Continental Free Trade Area and the “amazing results that the country is having in terms of macroeconomic stability, improvement in the economy and reforms in the banking sector”.
He said the achievements were indications of the confidence reposed in the economy and a very good base for further development of the country.

Mr Pimenta indicated that in the last five years, the IFC had invested almost $2 billion in the Ghanaian economy.

It was also mobilising funds to assist the private sector, so that it could have more impact without creating a big burden on the budget of the state, he said.

He noted that the main focus of the IFC was the creation of jobs through projects and programmes, adding that the key sectors it was looking at were agriculture and agri-business, as well as information and communications technology (ICT), all geared towards job creation.