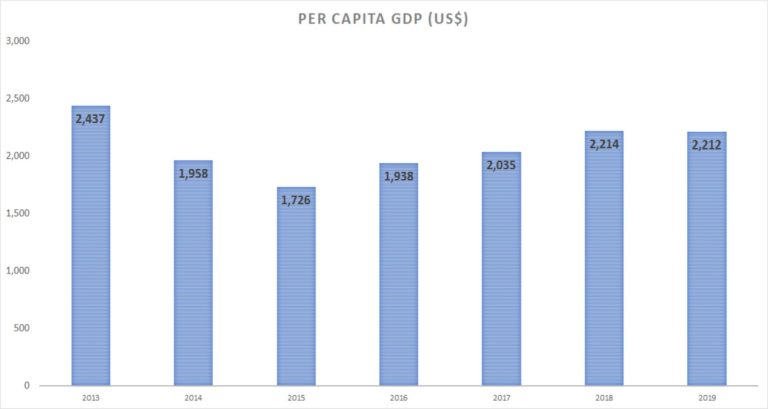 The average standard of living of Ghanaians virtually experienced no change between 2018 and 2019 as figures from the Ghana Statistical Service (GSS) show that the GDP per capita of the economy marginally declined between the period.

The data indicates that per capita GDP – which simply divides a country’s gross domestic product by its total population, giving an average idea about how prosperous its citizens are – declined marginally to US$2,212 in 2019 from US$2,214 in 2018, reflecting a 0.09 percentage point drop. This was measured against a population of 29.61 million and 30.28 million in 2018 and 2019 respectively.

Commenting on this, Prof. John Gatsi, Dean of School of Business at the University of Cape Coast, says the reality on the grounds simply shows the income and living standards of people are below the GDP per capita of US$2,212.

“Generally, there is a problem with per capita GDP because of the extreme value effect. What it means is that, few people in the topmost bracket are generating that average when, in reality, majority of the people are below that average per capita we are talking about.

The extreme value effect only means a few people with a high-income generation are pulling the rest to that level. But if you compare the absolute income levels to the per capita GDP, you will realise that majority of people do not fall within that average,” he said in an interview with the B&FT.

The professor’s comment simply means the high income inequality gap in the country is not taken into consideration when computing GDP per capital, hence, does not reflect the true worth of individuals in the country.

Data from Oxfam International reveal a harrowing gap between the rich and poor to the extent that, just one of the richest men in Ghana earns more in a month than one of the poorest women could earn in 1,000 years.

This indicates that economic growth over the years has not translated into making the lives of the majority of Ghanaians better as income inequality continues to show a yawning gap. The economy grew by 6.5 percent in 2019, indicating a 0.2 percentage point higher than the 2018 growth albeit missing government’s revised target of 7.1 percent for the year.

Besides the services sector which saw an increased growth, both industry and agriculture sectors saw growth decline. The services sector grew by 7.6 percent from the 2.7 percent it did in 2018; whereas the industry sector grew by 6.4 percent, indicating a 4.2 percentage points decline from 2018; and the agriculture sector also saw a 0.2 percentage point decline from last year to record 4.6 percent growth.

Since GDP per capita is the total output of a country divided by the population, it is obvious that the 2020 figures will show a significant downwards change as the economy’s growth is envisaged to decline drastically due to the impact of the coronavirus pandemic on productive activities.

Ghana’s economy is expected to experience its slowest growth in about four decades, making it the worst year since the historic 1983 when the economy was thrown into a recession.

Finance Minister, ken Ofori-Atta has said that the deadly global pandemic will cause Ghana’s economy to see GDP growth decline significantly to 1.5 percent should the country go on a partial lock down, of which it did. The IMF has also projected the same growth of 1.5 percent for the year, a big blow to an economy initially tipped to grow at 6.8 percent.

What will lead to this abysmal performance is the pandemic’s impact on commodity prices and trade. For an economy that has recently relied on oil as that main driver of growth, falling oil prices will definitely hit the economy hard. Oil is currently selling around US$20 per barrel.

Meanwhile, in the 2020 budget, revenue from crude oil was projected using a price of US$62.6 per barrel. Finance Minister Ken Ofori-Atta says government estimates to lose more than GH¢5.6 million, even if the price climbs to US$30 per barrel.

Simply put, since GDP is tipped to decline, and population is always estimated to increase, the GDP per capita for 2020 will definitely record a lower figure than it did in 2019, at least.