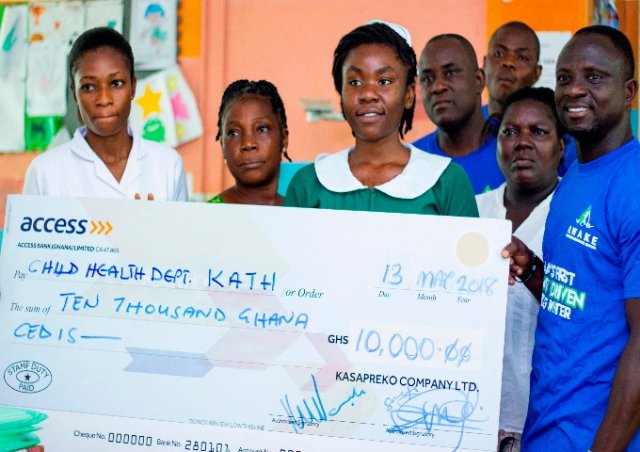 Awake Purified Drinking Water a product of Kasapreko Company Limited, has as part of this year’s Mother’s Day celebrations paid the hospital bills of 30 mothers at the Komfo Anokye Teaching Hospital (KATH).

The bill which amounted to ¢10,000 was a gesture to support mothers on admission who could not afford to pay their hospital bills and also mothers who delivered on the eve of Mother’s Day.

The National Sales Manager of Kasapreko Company Limited, Samuel Wilberforce Awuku, explained that the initiative to continuously support the needy in society was a core principle borne out of the brand’s flagship CSR program, One4Life.

“Awake has been supporting the Korle Bu Teaching Hospital’s Cardiothoracic Centre by paying for surgeries of needy patients with cardiovascular diseases,” he added.

According to him, since the company has become associated with charity, they thought it wise to extend a compassionate hand to mothers who were unable to pay for their medical bills as part of this year’s Mother’s Day celebrations.

Mr Awuku further assured the Mother and Baby Unit (MBU) of the KATH of Kasapreko’s continuous support since giving back to the society forms part of the vision of Dr Kwabena Adjei, Group Chairman of Kasapreko Company Limited.

Rose Oware Tweneboa, Nurse Manager of the Child Health Department upon receiving the cheque on behalf of the mothers, expressed appreciation to Awake Purified Drinking Water for the kind gesture.

She appealed to individuals, churches and corporate Ghana to continue to come to the aid of MBU and the Children’s Block of the hospital.