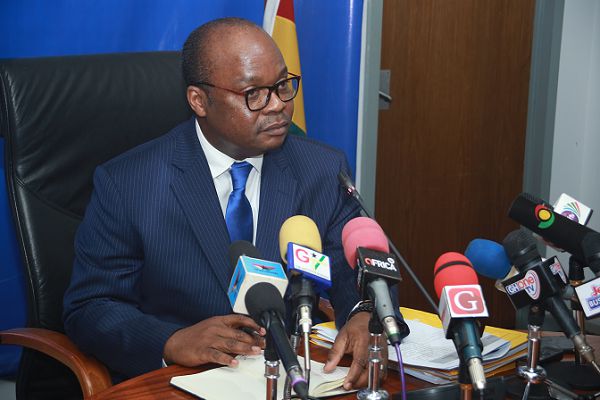 The Bank of Ghana (BoG) has completed a major clean-up of the banking sector, in the course of which the licences of nine banks have been withdrawn and over GH¢12 billion spent to protect depositors from losing their funds.

The exercise has also led to the number of banks reducing from 36 in 2017, when the reforms started, to 23 as of yesterday.

The Governor of the BoG, Dr Ernest Addison, said at a press conference in Accra yesterday to announce the central bank’s recapitalisation exercise that during the period, the central bank had “to take tough but necessary steps to clean up the banking sector and reposition it to support the economic growth and transformation agenda of Ghana”.

He expressed satisfaction that the exercise had come to a successful end without a single customer losing money.

Dr Addison said the country could now look forward to a strong, stable and liquid banking sector that could support the government’s economic transformation agenda.
He, however, admitted that the exercise had been “quite an expensive one” for the state.

In all, the state issued three bonds – GH¢2.2 billion in August 2017, GH¢5.76 billion in August 2018 and GH¢1.4 billion on January 4, 2019 – to cover depositors’ funds in banks whose licences were revoked and their selected assets and liabilities transferred to either the Consolidated Bank Ghana Limited (CBG) or the GCB Bank Limited.

Dr Addison, flanked by his two deputies, also announced that the BoG had withdrawn the licences of Heritage Bank Limited and Premium Bank Limited.

Both were found to have breached aspects of the Banks and Specialised Deposits Taking Institutions (BSDI) Act (Act 930) 2016, the governor said.

The two defunct banks add to the uniBank, Sovereign, BEIGE, Royal, Construction, UT and Capital banks whose licences were withdrawn in 2017 and 2018 for similar breaches.

As was the case with the previous seven banks, Dr Addison said customers of Heritage and Premium banks would not lose their money.

He said the government had issued a GH¢1.4 billion bond to enable the assets of the two banks to meet their liabilities as they fell due.

The central bank, as part of the reforms, downgraded the GN Bank to a savings and loans company after the bank failed to raise the minimum capital of GH¢400 million.

“The central bank has also approved the transition plan submitted by GN Bank for winding down aspects of its business which are not compatible with the savings and loans licence.

“In this regard, the central bank has also appointed an advisor for GN Bank, pursuant to section 101 of the Banks and Specialised Deposit-Taking Act, to advise the management of GN Bank to ensure a smooth transition to a viable savings and loans company. The advisor will hold office until otherwise advised by the Bank of Ghana,” Dr Addison said.

The governor also announced that the government had plans to restructure the National Investment Bank (NIB) and the Agricultural Development Bank (ADB) to ensure that they focused on industrialisation and agriculture, respectively.

“The government has notified the Bank of Ghana that it intends to restructure the NIB through governance and management reforms, as well as streamline the bank to focus on industrialisation.

“To ensure that these reforms go through, the Bank of Ghana has appointed an advisor for the NIB, pursuant to Section 101 of the Banks and Specialised Deposit-Taking Institution Act, 2006,” he stated.

Touching on the recapitalisation exercise which ended on December 31 2018, Dr Addison said 16 banks had met the capital requirement on their own accord.

Six other banks, he said, were at various stages of merging into three banks to help meet the recapitalisation directive, which required banks to raise their minimum paid-up capital from GH¢120 million to GH¢400 million.

He explained that a private initiative – the Ghana Amalgamated Trust (GAT) Limited – was also supporting five indigenous banks to recapitalise under a special arrangement that had the government’s blessing.

He listed the beneficiary banks as the ADB, the NIB, the Universal Merchant Bank (UMB), the Prudential Bank and the OmniBank, which was merging with the Sahel Sahara Bank.

Dr Addison explained that the Bank of Baroda Ghana Limited was exiting the country following the decision of its sole shareholder, the Bank of Baroda India, to sell its 100 per cent stake, in line with the Indian government’s directive.

He explained that Stanbic Bank Ghana Limited had assumed all loans and selected assets of the Bank of Baroda.

The central bank, he said, had also approved three applications for mergers, which had seen the First Atlantic Merchant Bank Limited and the Energy Commercial Bank merge.
OmniBank and Sahel Sahara Bank have also merged, while the First National Bank and GHL Bank have merged.

The successful completion of the ongoing mergers and injection of additional capital into the five indigenous banks being supported by the GAT would mean that the capitalisation of the banking sector will rise to some GH¢9.2 billion.

“The ongoing strengthening of the regulatory and supervisory framework will also ensure that the sector is well-governed, well-managed and better supervised to restore and maintain much-needed confidence in the sector,” he added.