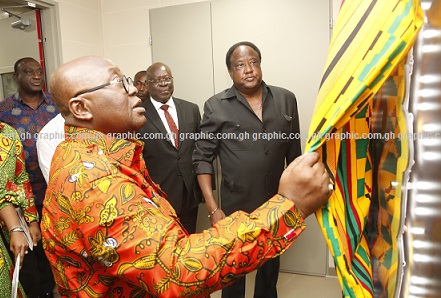 The platform, which is the first in West Africa and the third in Africa, will link food crop producers to buyers to secure competitive prices for their produce, provide a guaranteed market and storage of quality graded grains and cereals.

The exchange works on the warehouse receipt system, where farmers with a minimum of 20 bags of, say, maize, can deposit their produce at any of the exchange’s warehouses, where they will be tested at a laboratory, graded and deposited at the warehouse.

The farmer receives a certificate of title (receipt), after which the grains are re-bagged into 50 kilogrammes.

With the certificate in hand, the farmer may decide to exchange it for cash or keep it for sale during the lean season, thereby avoiding exploitation by middlemen during bumper harvests.

The farmer can also use the commodity title as collateral for loans from an array of banks that the state-owned exchange is working with.

Launching the exchange, President Akufo-Addo said the commodity exchange would be one of the key drivers to realise the country’s vision of becoming the agricultural hub of West Africa

He expressed worry that Ghanaian farmers had, over the years, broken their backs in feeding the nation, yet they had no guaranteed incomes to show for their labour.

He said commodity price volatility had been a challenge for many farmers, while others had no knowledge of the true value of their produce, coupled with the fact that most transactions in the agricultural sector were conducted by word of mouth or handshake agreements.

President Akufo-Addo said agro-industry players also had major concerns, with varied qualities of the same commodity often mixed together and sold, with clear disregard for accuracy in weight.

He said the players were also concerned about the non-existence of a national system for the weighing and standardising of the quality and quantity of commodities.

Those challenges, he stated, had compelled people to resort to expensive solutions and alternatives which included engaging outgrower schemes to tie producers to delivering outputs or extending considerable amounts of input financing.

He indicated that the government would make sure that the GCE delivered on its mandate, promoted high productivity, price stability, increased exports and reduced imports of commodities and, in the light of the emerging regional and continental free trade area, positioned Ghana as the premier West African global trading hub.

To that end, he said, he had charged the Securities and Exchange Commission (SEC), regulators of the securities market, to carefully study the workings of the commodity exchange and understand them clearly in order to remove every regulatory impediment on its way.

With an estimated one million farmers set to be rolled onto the warehouse receipt system and the exchange within the next 18 months, the President said Ghanaian farmers would gain access to secure storage for their harvest and good warehousing management practices.

That, he explained, would substantially reduce post-harvest losses, improve farmers’ take-home sales, provide them with affordable short-term loans, using their commodities as collateral, as well as managing borrowers’ credit and default risks.

Farmers would also have access to daily real-time market and price information directly via text messaging.

The President encouraged traditional rulers and others to help with the sensitisation for more farmers to participate in the new trading exchange system in order to improve the lives of their people.

The Minister of Finance, Mr. Ken Ofori-Attah, said the platform would contribute to the transformation of the economy, especially by offering farmers respectable prices for their toil and, at the same time, creating jobs through the value chain.

He said the exchange, together with the warehouses, was expected to provide about 200,000 skilled and non-skilled jobs.

He gave an assurance that the Agricultural Development Bank (ADB) would be strengthened and made to shift focus from commercial banking and concentrate on providing support for agricultural development in the country.