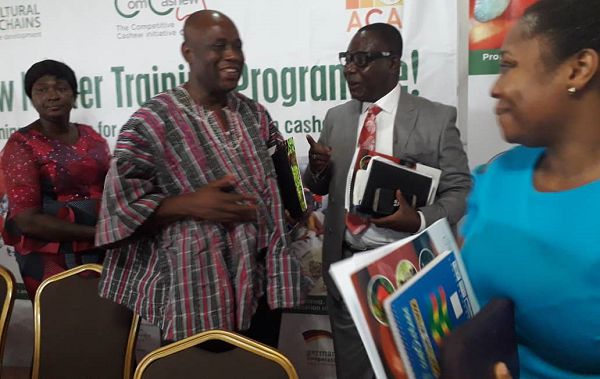 Eighty-five experts in the cashew industry from nine African countries have converged on Peduase in the Eastern Region to discuss ways to promote cashew production in Africa and enhance its competitiveness.

Participants in the five-day training programme will share knowledge, discuss best practices and lessons and build national and regional networks for effective collaboration.

The meeting is being organised by the German cooperation initiative, Competitive Cashew Initiative (GIZ ComCashew), in partnership with the African Cashew Alliance (ACA), with support from the Ministry of Food and Agriculture (MoFA) and the Cocoa Research institute.

The meeting will, among others, discuss cashew market dynamics, marketing and financing mechanisms.

Opening the conference, the Director of Crop Service at the MoFA, Mr Seth Akoto, said in 2018 cashew contributed $196 million to Ghana’s economy, representing 53 per cent of the overall value of non-traditional exports, which was $371 million.

That, he said, was an indicator of the potential of the competitive cashew value chain.

He said the government, through a joint effort by the Ministry of Local Government and Rural Development and MoFA, had rolled out the Planting for Export and Rural Development (PERD) programme to develop nine commodity value chains, namely, cashew, coffee, cotton, coconut, citrus, oil palm, mango, rubber and shea nut.

Under the programme, which is expected to run from 2019-2025, Mr Akoto explained, the government would support one million farmers in 170 districts with certified planting materials to cover more than one million hectares and engage 10,000 young graduates as crop specialised extension officers.

That, he said, was intended to boost production, promote rural economic growth, improve the household incomes of rural farmers and create a sustainable raw material base to support the One District, One Factory initiative of the government.

Additionally, to manage, regulate and promote the value chains of four tree crops — cashew, oil palm, shea and rubber —  a Tree Crop Authority would be set up soon, he said.

Mr Akoto commended the organisers of the training programme, saying that it would strengthen the capabilities of players in the cashew value chain to become change agents.

A Deputy Minister of Local Government and Rural Development, Mr Collins Ntim, in his address, said for the pilot year of the PERD in 2018, 9.3 million cashew seedlings were distributed to 64,000 farmers in 106 districts.

Although cashew contributed substantially to total non-traditional export earnings for the economy in 2018, he said, its farmers faced a number of challenges.

He mentioned low productivity due to poor agricultural practices and low return on investments, disconnection of farmers from markets and the lack of access to  training and business as some of the challenges facing the farmers.

He said such training programmes formed part of the solutions to the knowledge deficiency that existed among the farmers, policy makers and other players.

“Bringing all value chain actors together to share knowledge, network and learn about the contribution and challenges of one another is definitely a way to ensure the rapid, yet sustainable, development of the sector,” he added.

The Director of Private Sector Development at GIZ/ComCashew Initiative, Ms Mary Adzanyo, for her part, pointed out that there was still a lot of untapped potential in the cashew sector, especially processing and value addition.

She, therefore, called for more support for local processors to realise the goal of increasing local value addition.

The President of the Association of Cashew Processors in Ghana, Mr Ed-Malvin Nii Smith, said there were about 20 cashew processing factories in the country out of which only two were operational currently.

With support from the private sector, he said, six of the collapsed factories would be revamped to start work by April this year.

He expressed the hope that the government would expedite action on the Tree Crop Authority to regulate the sector.