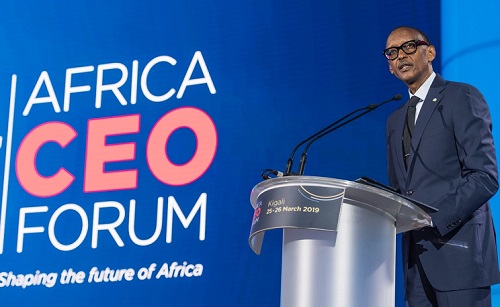 President of Rwanda Paul Kagame has urged the private sector and governments of the continent not to treat the Africa Continental Free Trade Area (ACFTA) as business as usual, as it holds the potential of providing jobs for the continent’s youthful population.

Mr. Kagame said the landmark agreement that was signed last year holds the future of the continent, and a lot will depend on the attitude of government and the private sector when the deal is ratified.

Speaking at the opening of the Africa CEO Forum in Kigali, the Rwandan President said in less than a generation it is projected that Africa will have the world’s biggest workforce – that is 1.1 billion working-age Africans, which is more than China or India.

“We don’t have any time to waste to do what is necessary so that this statistic becomes Africa’s greatest asset, rather than a burden for our continent and the world. It is our responsibility to ensure that deeper integration translates into prosperity and well-being for Africa’s people.

“No one should be satisfied with business as usual; what we need is much more business activity – above all with each other, so that we see the emergence of global African firms with continental scope and scale which champion the interests and ambitions of our people,” Mr. Kagame said.

According to him, this is the right time for private sector leaders to reflect on what needs to be changed and improved on their end, thereby leading to a situation where the private and public sectors will challenge and push each other to make even more progress.

Given Africa’s sprawling population, he said, there is a need for public and private sectors to work even more closely together on providing the education and training that will equip Africa’s young workers with the skills to excel in manufacturing, services, and technology.

“Africa will soon be the biggest, on some measures. Africa can also be among the best. Our continent must aim to compete on quality, not just on cost. Knowing and sharing the examples of those who have succeeded in Africa will help illuminate the path, and above all encourage cooperation.

“Working together to make a triumph of the Continental Free Trade Area and the Free Movement of Persons is therefore of the very highest consequence for Africa’s future,” he argued.

CFTA, a year on

A year ago, 44 countries signed on to the African Continental Free Trade Area and also adopted the Protocol on Free Movement of Persons.

The CFTA among other things is to create a single continental market for goods and services, with free movement of business persons and investments, and thus pave the way for accelerating establishment of the Continental Customs Union and African Customs Union.

The agreement, when fully ratified, will bring together fifty-four African countries with a combined population of more than one billion people and a combined gross domestic product of more than US$3.4trillion.

The theme for this year’s forum, which is in its seventh year, is Open Africa: From continental treaties to business realities, and the founder and President of Africa CEO Forum said the theme was chosen to kick-start a global conversation between the public and private sectors on how to move forward together.

An ambition that he said has also to extend to those who are could not attend the 2-day forum.

“Because none of our actions will make sense if they don’t give priority to a fair distribution of growth, to creating opportunities for all, and to taking care of the environment,” he added.