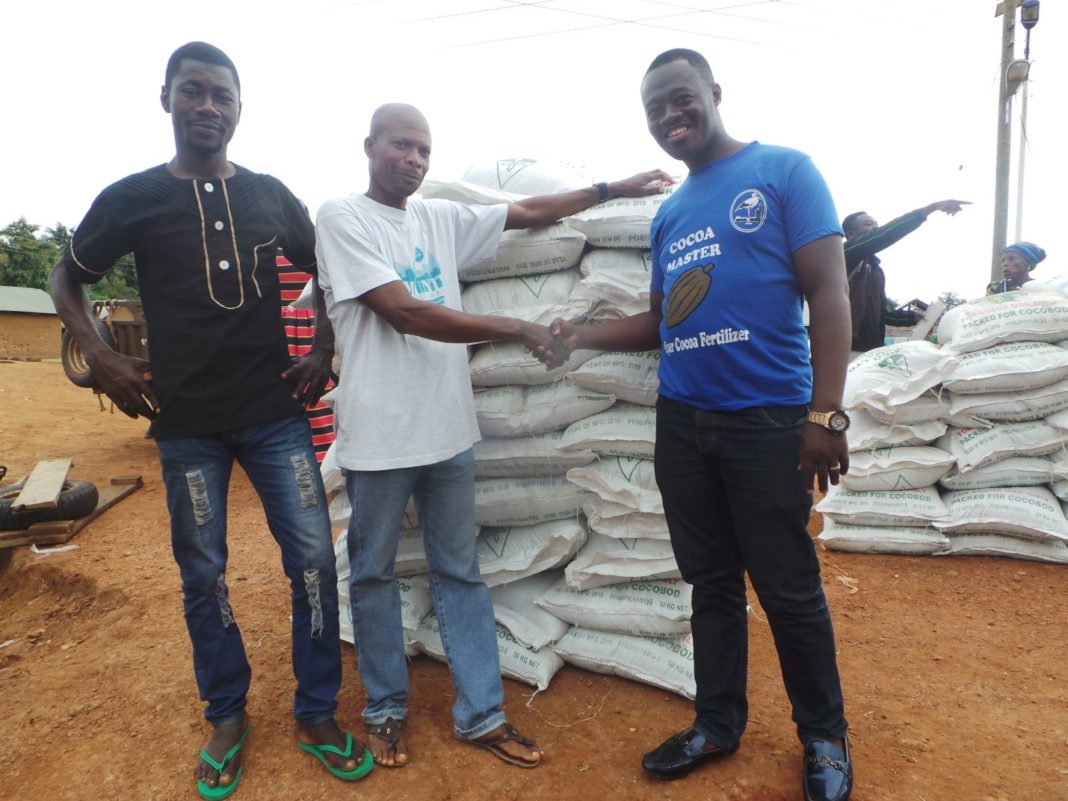 Cocoa farmers have commended the Ghana Cocoa Board (COCBOD) for its revised modus operandi in the supply of critical inputs such as fertiliser to farmers, especially those in the remote communities.

Currently, the COCOBOD directly supplies inputs to farmers through registered cooperatives. According to the farmers, the newly adopted system distribution is by far better than the erstwhile practice wherein they

were ‘helplessly; subjected to extortion by ‘goro boys’ in the supply chain, including political actors.

The Chairman of Kofibourkrom Cocoa Farmers’ Cooperative, Joseph Kwame Yeboah said: “Previously, there were so many middle-men in the cocoa inputs supply chain; they used to extort money from farmers or sell the subsidised inputs to farmers on the open market. Many farmers, particularly those in remote areas, had difficulty accessing the inputs”.

He was speaking during a presentation of subsidised fertiliser to farmers at Kofibourkrom in the Dormaa East district of the Bono Region. The COCOBOD presented 2,500 bags (50kg) of cocoa-feed N.P.K fertiliser to the farmers.

The Dormaa District Cocoa Officer of COCOBOD, David Afriyie Gyebi, said a total of 144,000 bags of fertiliser is expected to be distributed to farmers in the Dormaa district. He cautioned farmers not to sell the fertiliser but use it for the intended purpose of boosting cocoa production, which will ultimately increase their income.  He also advised the farmers to embrace best farming practices and avoid the use of weedicides and unapproved agrochemicals.

In an interview with B&FT, a 44-year-old farmer, George Twumasi Amponsah, testified that hand-pollination has increased farm-yield significantly, and commended government for the intervention. “I used to harvest about 40 bags, but after the first year of hand-pollination production soared to over 70 bags.”

The Chairman of Kofibourkrom Farmers’ Cooperative, Mr. Yeboah, appealed for government to as a matter of urgency construct the 19 km Kofibourkrom-Kyeremasu road to help open-up the community to the rest of the country. He said the deplorable nature of the road makes it very difficult for farmers to cart produce to market centres, indicating that they have to resort to tricycles and motorbikes.

He also revealed the community’s cocoa shed was constructed in 1962, and the facility has since not seen any renovation. As a result of erosion, the building is nearing collapse; the walls are peeling off, while the roof has developed gaping holes. The farmers’ leader passionately called on government to assist the community with a befitting cocoa shed.