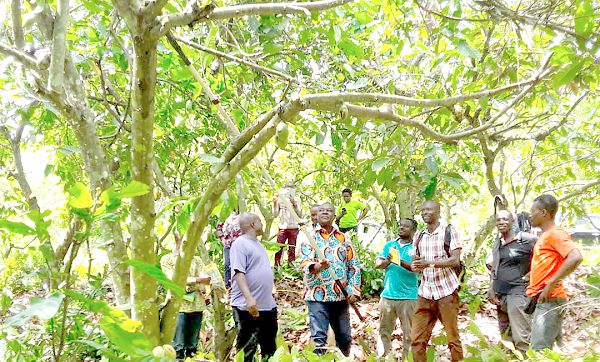 The Ghana Cocoa Board (COCOBOD) has pruned about 12, 424.4 hectares of cocoa farms this year in the Bono, Bono East and Ahafo regions as part of its Productivity Enhancement Programme (PEP).

The mass pruning exercise, which started in March 2019 and is expected to end this month, forms part of the implementation of various programmes by COCOBOD to improve the yield of cocoa farmers without necessarily expanding their farms.

The pruning is being done to remove some cocoa trees and branches from overcrowded cocoa farms to allow enough sunshine and air which are necessary to improve the health of the trees for better yields.

These came to light when the Director of Human Resource/Solicitor Secretary of COCOBOD, Mr Francis Akwasi Opoku, visited some cocoa farms in the Ahafo and Bono regions to inspect the pruning exercise being undertaken by youth gangs employed by the company.

Addressing some of the gangs in various cocoa farms at Bechem Junction and Kwasuso, Mr Opoku commended them for the zeal and commitment to enable the company to achieve the objectives of the exercise.

He also visited some farms where the youth had been employed to artificially pollinate the cocoa trees to increase their yields.

For his part, the Deputy Director of the Cocoa Health Extension Division (CHED) of COCOBOD, Dr Nii Tackie-Otoo, said Ghana was currently surviving on the production from 60 per cent of all cocoa trees since 23 per cent of the cocoa trees were overaged while 17 per cent had been wrecked with diseases.

“It is the productivity from the PEP that is sustaining the cocoa industry”, he stated and encouraged farmers to accept the policy to prune their cocoa farms for increased yields.

“We do not want the farmers to expand their farms unnecessarily but rather embrace the good agronomic practices being taught under the PEP to enable them reap better yields from their existing farms”, he stated.

Dr Tackie-Otoo advised farmers to consider their farming activities as business and reserve part of their profits to supplement efforts by the government in order to improve on their incomes.T

A prominent cocoa farmer at Kwasuso, Mr Anthony Appiah Ankrah, said the government assisted in pruning three acres out of his 60-acre cocoa farm and explained that the increased production from the pruned area had encouraged him to prune the remaining area himself.

He stated that the pruning exercise, coupled with the provision of liquid fertiliser, artificial pollination and the supply of other inputs had begun to have a positive impact on the cocoa industry and appealed to the government to expand such policies and programmes.

However, a leader of one of the gangs pruning the various farms, Sampson Anane, mentioned insufficient tools such as adjustable ladder, boots and clothing as some of the problems hampering the smooth implementation of the programme.

He also called for regular training for those who had been engaged for the pruning and other programmes aimed at improving on the yields of cocoa farmers.