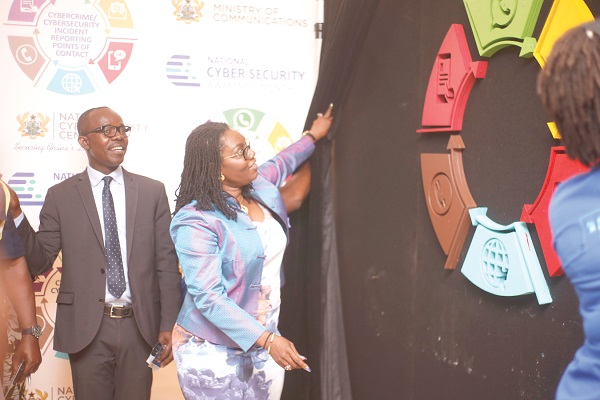 The National Cyber Security Awareness Month 2019 and the Cybersecurity and Cybercrime Incident Reporting Point of Contact (PoC) have been launched in Accra.

The PoC is a platform that will facilitate the reporting of cybercrime and cybersecurity incidents in the country.

The Minister of Communications, Mrs Ursula Owusu Ekuful, who launched the two programmes yesterday, said the establishment of the platforms demonstrated the country’s readiness to enhance the state of security in its cyberspace.

She said the PoC cuts across all demographics, which include government, the private sector, the public and children, explaining that the “multi-platform approach had been adopted to provide multiple channels through which incidents could be reported to the National Cyber Security Centre by e-mail, corporate and government sectors or by filing through online platforms such as Whatsapp, Instagram and Facebook.

A voice call PoC is also available for children, businesses, government and individuals who are less technology savvy, and citizens who do not possess smart phones or have access to the Internet to report on incidents”.

Mrs Owusu Ekuful added that an SMS option was also available, saying voice calls and SMS use were all toll-free.

A mobile app was also available for people who were technology enthusiasts to report on cybercrime incidents, she said, adding that it also served as repository of cybersecurity and safety advisory to users, allowing them to access cybersecurity safety tips on a regular basis.

“The lack of credible statistics on cybercrime is a major concern, as it affects the ability to critically analyse cybersecurity issues affecting the digital economy to inform relevant interventions and capacity-building programmes,” she added.

She noted that the platforms would further enable the government to produce relevant statistics in a timely manner to support strategic planning, as well as investment in cybersecurity.

It would also help the security and the law enforcement agencies to conduct evidenced-based analysis of criminal issues and the impact of cybercrime on a wider criminal justice system in order that they no longer relied on anecdotal evidence, she said.

The minister, therefore, urged citizens to take full advantage of the platforms and report incidents in a timely manner for prompt response.

“I urge you all — organisations, individuals, businesses and children — to report all cyber-incidents as soon as they become known, whether you are a victim or a witness.

The part you play in this will go a long way to secure Ghana’s digital journey, and I cannot stress how important your role is in this process,” she said.

He said cyber attacks were likely to escalate in the near future, especially with the increase in Internet penetration and the massive reliance on information and communications technology (ICT) devices such as mobile phones for day-to-day transactions and interactions by citizens.

He said over the past two-and-a-half years, the country had shown tangible deliverables with respect to cybersecurity development “because we have been privileged to have a President who believes that building a digital economy requires sustainable investment in our cybersecurity”.

Members of the National Cyber Security Technical Working Group, comprising agencies with responsibilities over cybercrime and cybersecurity, had been instrumental in working towards enhancing the state of security in cyberspace, Dr Antwi-Bosiako said.

According to him, the launch of the two cyber platforms constituted another milestone in ensuring that Ghana achieved its mandate of addressing cybercrime.