Cotton sector to get $10m boost 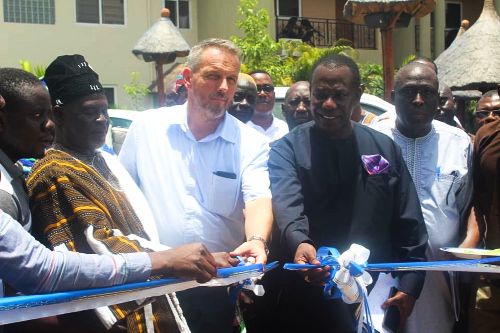 RMG Ghana, an agro input company, is to invest $10 million in the Cotton industry under a five-year project.

The investment will cover the supply of inputs to farmers, operational costs and marketing.

The initiative is part of a strategic partnership agreement between RMG Ghana and Wienco Cotton to make Ghana one of the major producers of cotton in Africa.

Speaking at a relaunch of Wienco Cotton operations in Tamale, the Group Chief Executive Officer of RMG Ghana, Mr Daniel Ruegg, said the event was to rebrand the cotton industry.

He said the investment by his outfit would help ensure expansion of farm sizes, timely availability of production inputs for high productivity and improvement in income levels of cotton farmers.

“We will pre-finance acquisition of all inputs and also sell the cotton on the international market. The white gold of Ghana, as it used to be called, must return to be the game-changer in the country’s economy,” Mr Ruegg added.

“It has been the government’s wish to revitalise the Ghana cotton industry and I would like to commend Wienco Cotton and RMG Ghana for taking this bold initiative towards revamping the industry,” he said.

According to Mr Osei-Akoto, it was after the launch of the Cotton Sector Revival Strategy in November in 2010, that Wienco Cotton, Armajaro Cotton and Olam Cotton companies emerged in the industry as the chosen investors, but some of them had to pull out of production later because of the challenges.

Mr Osei-Akoto, therefore, urged RMG Ghana and Wienco Cotton to use their rich experiences and the lessons learnt to guide them in their cotton revival mission.

The minister assured them of the government’s support in the promotion of the cotton sector which, he said, was one of the commodities in the ‘Planting for Export and Rural Development Programme.’

According to him, “the ministry is in talks with the Xinjiang Tianye Group of China to establish Agricultural Industrialisation Parks in the Northern Savannah Ecological Zone (NSEZ) of Ghana for the commercial production of cotton and other crops.

“The Arailius Group of Britain also intends to invest in cotton and textile production, while the China Agricultural Machinery and Engineering Corporation (CAMEC) is to establish mechanisation centres in cotton producing districts to promote smallholder and commercial cotton production,” he added.