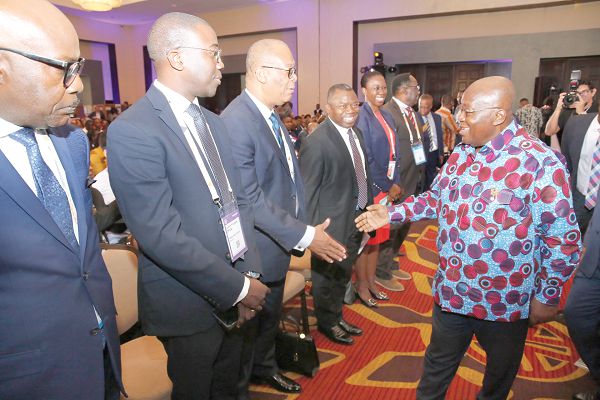 He said the twin criminal acts were on the increase on the continent and financial institutions could not afford to sit back as if nothing was happening.

“Just as technology offers opportunities to grow our economies and bring progress to our people, there are criminal syndicates who will always be bent on exploiting it for their selfish interests. They have to be relentlessly fought,” he said.

President Akufo-Addo made the call when he addressed the opening session of the African Regional Conference of the Society Worldwide Interbank Financial Telecommunication (SWIFT) in Accra Tuesday.

The conference, which is on  the  theme: “Enabling the Digital Economy”, has attracted experts in the banking, ICT and security sectors to discuss and take decisions on financial and trade issues.

President Akufo-Addo said the SWIFT had, over the years, worked with Ghana and other nations to reduce vulnerabilities to external risks and applauded the society for that.

He said as a result of the reforms that had been undertaken in the country’s banking sector, the financial sector’s standing in global risk assessment had received a significant boost.

He urged the Bank of Ghana (BoG) to make sure that Ghana’s financial sector remained fit for global integration by ensuring compliance with international systems and standards.

He indicated that the government had established the National Cyber Security Centre to oversee and coordinate the national cyber security programme.

President Akufo-Addo added that the centre had instituted a cyber security awareness programme, among other initiatives, which had set Ghana on the path to developing a robust national security system.

He said Ghana had made some modest gains by setting the mode for a digital economy to improve the well-being of the people.

Additionally, he said, it was rolling out a national identity system which required that a citizen must have a digital property address.

He said landed properties were being assigned unique identifiers because proper addressing of properties would ensure the efficient delivery of services for economic development.

The President said the national biometric identity cards were also being linked to data such as social security and driver’s licences which would lead to a credible national database.

He said the government also embarked on the mobile money interoperability platform which had completed the cycle of mobile money payments by linking money wallets to bank accounts and E-zwich cards.

He explained that that had created a level playing field for people with or without bank accounts to conduct financial transactions, which was promoting financial inclusivity.

President Akufo-Addo said mobile money penetration in Ghana was currently the second highest in Africa, adding that in 2018 mobile money transactions were worth GHc230 billion, up from GHc78.5 billion in 2016.

He said it was anticipated that with continuous reforms, Ghana would have a strong competitive edge in the sub-region for financial innovation and access to credit.

He said the government was committed to having a system to manage all government receipts and payments by 2020, and that caterers under the school feeding programme, beneficiaries of the LEAP programme, recipients of nurses’ and teachers’ allowances, national service personnel and the 100,000 people of the Nation Builders Corps would receive their payments on the E-zwich system.

President Akufo-Addo said the BoG had reviewed, amended and consolidated all existing payment systems and regulatory frameworks into the new Payment Systems and Services Act of 2019 which he assented to last week.

He said the new legislation was expected to ensure that banks, non-bank financial institutions and especially rural and community banks provided services that would bring banking and financial transactions closer to the public.

He said the agenda on creating a digital economy had been extended to other sectors of the economy, including the introduction of the paperless port system which had aiding trade operations and reduced the cost of doing business.

President Akufo-Addo noted that the E-justice system was also aiding the law courts to ensure that the courts kept pace with technology to make remarkable progress.

The Governor of the BoG, Dr Ernest Addison, said the bank recognised the role of digitisation and innovation in ensuring an inclusive economy.

Consequently, he said, the government, through the BoG, was collaborating with stakeholders to digitise the financial landscape to deepen financial inclusion.