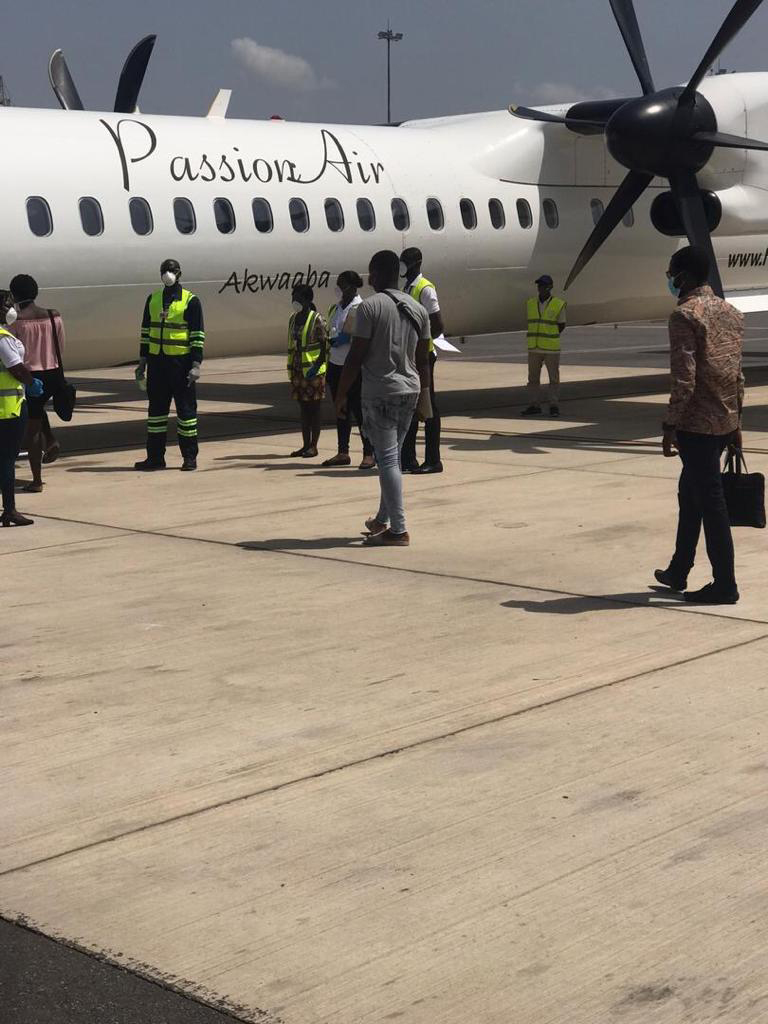 Domestic airline operators in the country have started recording a gradual surge in passenger traffic due to the easing of restrictions on movement to contain the spread of the coronavirus disease (COVID-19).

Data from the Ghana Airport Company Limited (GACL) indicate that since May 1 when further relaxation of the restrictions allowed for conferences, workshops, funerals, among other social gatherings, to take place, passenger numbers have been surging.

According to the data, passenger throughput from Accra to the two major domestic destinations of Kumasi and Tamale rose from nearly 1,850 travellers per week to almost 2,800 passengers per week.

The domestic air space is dominated by two operators, Africa World Airlines (AWA) and PassionAir, which carried the passengers 70 and 30 per cent, respectively.

Although the numbers have been increasing, the airline operators said the current passenger traffic was way low, compared to the period before the country recorded its first COVID-19 case when they could carry up to 2,200 passengers per day.

The airlines explained that they were presently in business just to build confidence, as the precautionary measure they had implemented to curb the spread of the virus were eroding their profit.

They mentioned physical distancing on board flights as one of the measures impacting their profitability, reducing aircraft capacity from 78 to 38 passengers, maximum.Advertisement

As a result, the operators said they had increased their flight frequencies from one daily flight to four return flights per day.

The additional flights would enable them to increase their output by up to 20 per cent to serve customers better, they said.

AWA, for instance, announced four daily return flights each to Kumasi and Tamale from Accra, starting today, in addition to the two weekly flights to Takoradi.

PassionAir, on the other hand, also added a second flight to its initial one flight a day on Mondays and Fridays to meet the weekend demand.

When the Daily Graphic team visited the Kotoka International Airport (KIA) last Friday, it was observed that passengers were trooping in to board flights to their various destinations.

The Departure Hall of Terminal Two, the terminal reserved for domestic flights, was the centre of attraction, as travellers trooped in to complete pre-departure formalities.

Although the Arrival Hall was not as busy as the Departure Hall on Friday afternoon, some few people were seen at the waiting area to pick up relatives, friends or business partners who were arriving from major domestic destinations in the country.

The team also observed that the management of the GACL had initiated a number of mandatory COVID-19 safety protocols, such as the wearing of nose masks, the use of hand sanitiser, as well as physical distancing, for travellers and the airlines to strictly observe.

The various regulatory authorities, such as the GACL, the Ghana Civil Aviation Authority (GCAA) and the Ghana Health Service (GHS), were also on duty to enforce the laid down procedures and protocols.

The protocols implemented at the airport are home-grown measures, accepted by the International Civil Aviation Organisation (ICAO) and the International Air Transport Association (IATA), as guided by global standards for their member nations.

When contacted, the Chief Operations Officer (COO) of AWA, Mr Sean Mendis, observed that the airline was currently seeing a gradual surge in its passenger numbers.

The airline carried 5,686 passengers to their various destinations in May.

Consequently, he said, increasing flight frequencies to four daily return flights each to Kumasi and Tamale would ensure that people with essential travel needs could choose between a range of flight timings throughout the day to best complement their business schedules.

“Initially, AWA started with a one daily flight to Kumasi and Tamale; this is now going up to four daily flights each, as well as two weekly flights to Takoradi. This development occurred within a month. However, the numbers were still reduced compared to the period just before the virus was recorded in the country

“Despite the significant challenges thrown up by the COVID-19 pandemic, we are pleased to have operated 99.58 per cent of our scheduled flights, with only two flights delayed beyond two hours (both due to bad weather).

“Only one passenger was denied boarding due to over-sales in May, and only one bag, out of nearly 9,000 checked in, was delayed,” he said.

The Sales and Marketing Manager of PassionAir, Mr Samuel Razak Tachie, said patronage was improving gradually but was not near the expected numbers.

“We are currently capped at 38 passengers maximum per flight due to physical distancing protocols on board, while the aircraft has the capacity for 78 passengers,” he said.

Asked whether the easing of the COVID-19 restrictions contributed to the gradual growth in passenger traffic, he answered in the affirmative, and explained that patronage in Kumasi was often fuelled by social activities, while that in Tamale was encouraged by distance by air, compared to road.

“The patronage in Kumasi is fuelled by social activities, while that in Tamale is encouraged by distance, compared to road, and so we have realised that as soon as conferences, workshops, funerals, among other social gatherings, returned, the numbers have started growing, especially for Kumasi,” Mr Tachie said.

To make travel safe for customers, he said, all PassionAir aircraft were fitted with high efficiency particulate air (HEPA) to help clear particles and airborne contaminants such as viruses and bacteria.

“The HEPA filter removes 99.97 per cent of particles measuring 0.3 microns or bigger,” he said.