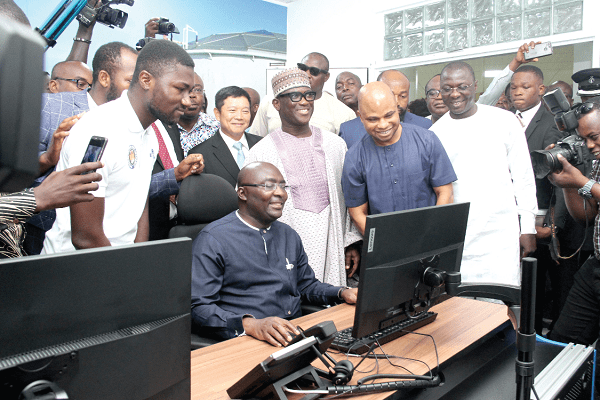 The Vice-President, Dr Mahamudu Bawumia, has inaugurated a command centre and an electronic sealing and cargo tracking system for the National Petroleum Authority (NPA).

The system has been deployed to improve standards and controls in the distribution of petroleum products in the country.

Dr Bawumia called on the NPA to collaborate with the relevant state agencies to attract the necessary private investment and appropriate technology into the sector.

He said the government placed high priority on the development of all sources of energy to ensure the availability of cheaper but quality energy for all Ghanaians.

The Vice-President commended the NPA and its stakeholder agencies for their efforts at improving operational standards and efficiency in the petroleum downstream industry, adding that energy was critical to the survival of mankind and, therefore, its sustainability had become a very important and burning issue around the globe.

The petroleum downstream sector, according to him, was a critical component in meeting the energy requirements of the country, since an efficient and effective petroleum products distribution system was important and essential to the economic growth of the country.

He lauded the NPA for adopting a technological approach in its efforts at improving standards and efficiency in the industry and gave an assurance that the government was putting measures in place to ensure that the Bulk Oil Storage and Transportation (BOST) Company Limited was adequately resourced to lead the transformation of the petroleum product distribution system.

The Vice-President expressed concern over the illicit activities in the petroleum downstream industry, mostly in the form of illegal bunkering, smuggling of petroleum products and dumping of products meant for export on the local market.

Those activities, he indicated, constituted an emerging threat which impacted negatively on Ghana’s maritime security, as well as its efforts at mobilising tax revenue from the sale of petroleum products.

In a speech read on his behalf, the Minister of Energy, Mr John-Peter Amewu, stressed the commitment of the government to ensure the regular supply of petroleum products to all parts of the country through a cost-effective and an efficient distribution system.

He indicated, however, that the current practice of transporting about 98 per cent of petroleum products used in the country by road was not the best.

“Currently, we also have no capacity in transporting petroleum products by rail,” Mr Amewu indicated, and called for the development of other modes of transport.

The Chief Executive Officer  of the NPA, Mr Alhassan Tampuli, said due to the absence of an effective tracking system, transport service providers exploited the lack of capacity of the NPA to independently confirm the delivery of petroleum products to retail outlets, thereby subjecting the Petroleum Fund to abuse by presenting false claims for costs incurred for the transportation of petroleum products.

To address the challenge, he said, the NPA opted for a technological approach that would enable it to have visibility on the movement of bulk road vehicles and the locations where petroleum products were loaded, hence the introduction of the tracking system.