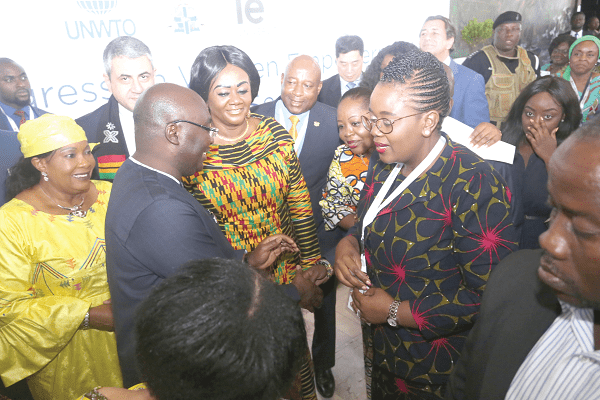 Ghana is to launch an electronic visa (e-visa) system next year to make it easy for tourists to visit the country, the Vice-President, Dr Mahamudu Bawumia, has stated.

He explained that with the introduction of the system, visitors to the country would not need to go to Ghana’s embassies abroad to apply for visas, as they could apply for them online.

The Vice-President announced this when he opened the first Regional Congress on Women Empowerment in the Tourism Sector – Focus on Africa, in Accra on Monday.

The two-day conference, which is on the theme: “Building the future together”, attracted both local and international players in the tourism industry.

Other participants included the First Lady of Zimbabwe, Mrs Auxillia Mnangagwa, and the Secretary General of the World Tourism Organisation, Mr Zurab Pololikashvili.

Dr Bawumia said the introduction of a digital address system by the government had ensured that every space in the country had a unique digital address, including tourist locations, for easy identification.

He said from next month, the digital address system would be incorporated into an emergency system to enable emergency service providers to locate distress callers to provide them with needed support.

According to him, car hiring service providers such as Uber were already using the system.

On the tourism sector, the Vice-President said the Ministry of Tourism and Culture was working towards positioning the country as a prime destination for tourists in sub-Saharan Africa.

He added that a Creative Arts Industry Bill was currently before the Cabinet for consideration, and that when passed, it would establish a Creative Arts Fund, an agency, among other initiatives, to promote the industry.

He said tourism could also play an effective role in achieving the UN Sustainable Development Goals (SDGs) if the sector was strengthened.

The Vice-President further explained that the SDGs were aimed at building knowledge and empowering and inspiring women to take necessary actions to accelerate the shift towards a more sustainable tourism sector by aligning policies, business operations and investments with the goals.

He said it was the duty of the government to create an enabling environment for the private sector to drive the tourism industry, noting that achieving that would strengthen government-private sector engagements, exchange of ideas and also devise supportive policy frameworks and the provision of smart subsidies and incentives where they were most needed.

The Vice-President said it was also a way to encourage start-ups in the sector, especially the participation of women and the youth in the industry.

He said advancing tourism’s contribution to the SDGs did not require only political will and private sector commitment but also new and better financing frameworks to empower women and the youth to build the future together.

“Let us increase the reach of multilateral development banks and donor countries to recognise women’s role in achieving the SDG goals for tourism. In Ghana, the proposed Creative Arts Fund is our answer to this challenge,” Dr Bawumia added.

The Minister of Tourism, Arts and Culture, Mrs Barbara Oteng-Gyasi, said the government was committed to making the tourism industry a leading contributor to national development.

She said the sector provided foreign exchange earnings for the country and generated employment which was contributing to poverty reduction.

According to the minister, women were not only users of tourism facilities and sites but also owners and managers of the sites, thereby making a significant contribution to the development of nations.