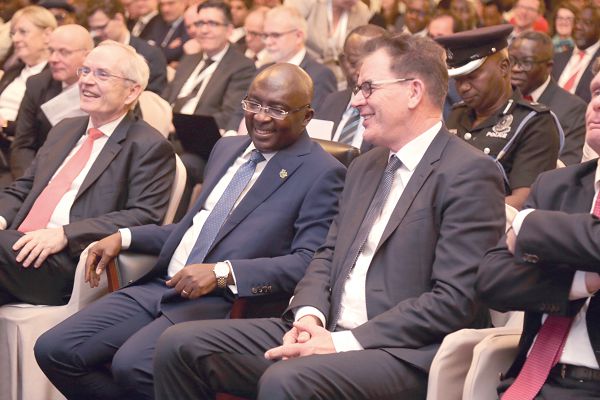 Payment for services in the public sector will be digitised from July this year to ensure cashless government business, the Vice-President, Dr. Mahamudu Bawumia, has announced.

The move, he said, followed the successful implementation of the mobile money interoperability infrastructure that would aid efficient electronic payments for government services.

“As of today, we have about 34.5 million mobile money subscribers in the country and the interoperability infrastructure allows payments to be made from bank accounts to mobile accounts and the other way round.

“With this infrastructure, we want to deal with the problem of financial inclusion, so by the middle of the year the government will move away from the use of physical cash as payment for services. This is the Ghana we are trying to build,” he said..

Dr. Bawumia announced this when he opened the third German-Africa Business Summit (GABS) in Accra yesterday.

The GABS is an initiative that brings together captains of industry and government leaders from Germany and sub-Saharan Africa biennially to discuss and promote economic relations among the parties.

It is organised by the Sub-Saharan Africa Initiative of German Business (SAFRI).

About 750 high-ranking representatives of business and politics from Germany and sub-Saharan African countries are participating in the summit.

Dr. Bawumia said the government was focused on promoting trade and investment to build a country with a robust economy, capable of meeting the development needs of the citizens.

He described Ghana as the best place for investment in Africa because he said the country had a stable democracy and a peaceful environment for businesses to thrive.

He added that the government had succeeded in improving microeconomic stability through reduction of the fiscal deficit, inflation, interest rates and the debt-to-gross domestic product (GDP) ratio, making the economy viable for investments.

Dr Bawumia stressed that the implementation of agricultural and industrialisation policies, such as the Planting for Food and Jobs (PFJ) and the One district, One factory (1D1F), was a reflection of the government’s determination to transform the economy.

He said the Cabinet passed the auto policy framework two weeks ago for all investors in the auto industry with a view to improving the industry and called on investors to explore the opportunities that abound there and in other areas such as energy, pharmaceuticals and the petrochemical industry.

The Vice-President observed that Africa was the future of the world, for which reason he asked investors to pay more attention to the continent.

“Demographically, by the year 2050 Africa will be the most populous continent in the world, and with this huge demographic dividend, increased trade and investments will help us make a difference.

But we also have to educate our people and put in place the right infrastructure and policies to turn our fortunes around,” he said.

Dr. Bawumia said the way forward was for African governments to increase trade among themselves and also seek strategic partnerships with other continents.

The Minister for Economic Cooperation and Development of the Federal Republic of Germany, Dr. Gerd Muller, commended Ghana for maintaining a stable democracy.

He called for the strengthening of accountability and democratic institutions to help fight corruption in order to boost investor confidence in the country.

On the way forward for Africa, Dr. Muller asked that value addition to raw materials should be prioritised as that would trickle down to job creation and boost the local economy.

“I want to say that Africa should not export cocoa and coffee as raw materials to Europe; it should add value to them,” he emphasised.

He also stressed the need for African countries to put in place policies for private investments to thrive and transform their economies.