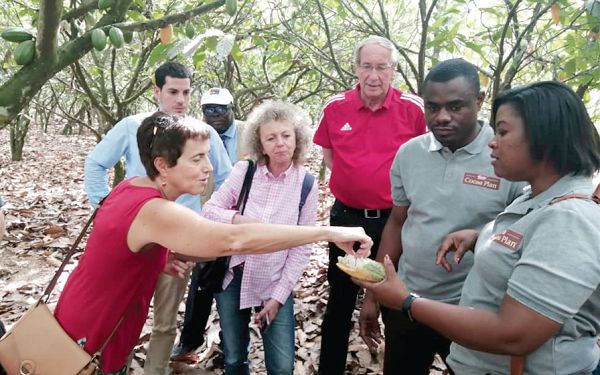 A six-member delegation from the European Parliament and envoys of the European Union to Ghana, led by the EU Ambassador, Ms Diana Acconcia, have paid a working visit to a cocoa farm at Banko in the Bekwai Municipality in the Ashanti Region to acquaint themselves with cocoa farming practices.

The visit afforded the team the opportunity to ascertain for themselves how the Nestlé Cocoa Plan (NCP), a sustainable cocoa production programme instituted by Nestlé became a success story.

The NCP programme ensures that through good agricultural practices, cocoa farmers produce cocoa beans in a sustainable manner and provide them with alternative livelihoods by way of income-generating activities as a way of stopping them from engaging children on cocoa farms.

Ms Diana Acconcia told the Daily Graphic she was impressed with the way and manner cocoa beans were produced.

According to her, “we have seen that it is possible to have cocoa with better yields and which at the same time promotes good living conditions for farmers and protects children from hard labour.”

Aside from that, she said, it was also evident that the programme was climate change sensitive, as the farmers were taught how to maintain the vegetation by planting other tree species to provide shades for the cocoa trees and also serve as windbreaks on the farms.

“For me, this shows that everything is a possibility if people cooperate and we work together. There will be more examples of this in future in the country and the EU is certainly ready to lend support,” she said.

The Head of the EU Parliamentary delegation, Mr Nobert Neuser, was grateful to the farmers and the management of Nestle Cocoa Plan for taking them through the cocoa farming processes.

He said for most of them it was the first time of visiting a cocoa farm to learn about cocoa production, adding that the experience had been an eye opener for them.

In an interview with the Manager for the Nestlé Cocoa Plan (NCP), Mr Daniel Nyarko, he said the company began implementing the programme in Ghana in 2016 and to Banko in 2017. He said by adopting good agricultural practices for sustainable land use and climate smart farming, cocoa farmers in Banko increased their farm yields within a period of three years.

As part of the NCP programme, farmers were given a variety of shade trees to plant on their farms and this had led to improved soil moisture, shade and general well-being of cocoa trees.

As of now, he said, the programme was working with a total of 28 farmers in Banko, who together had 55 hectares of cocoa farms.

The objective of the NCP programme is to ensure improved farm yields by educating and providing the cocoa farmers with the technical know-how on ways to maintain their farms through good agricultural practices.

It is also to provide alternative sources of income to improve household revenues and provide water and toilet facilities to improve water and sanitation in the cocoa growing areas where the programme operates.

Furthermore, the programme is targeted at ensuring that cocoa produced is of good quality and can be sustained through long-term loyal customer-farmer group relationships.