EU to invest €4.5 billion in Africa; it is to generate 10 million jobs in 3 years 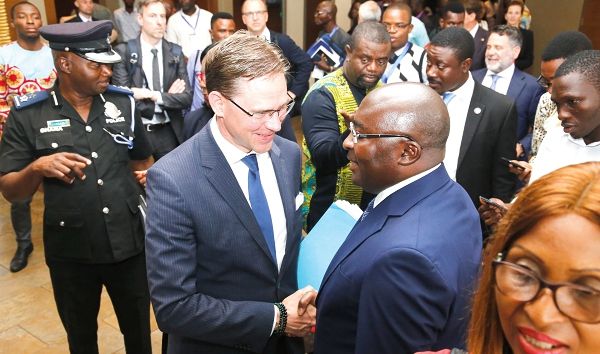 The European Union (EU) is to invest €4.5 billion of its budget in Africa to generate about 10 million jobs on the continent in about three years.

The Vice-President of the EU Commission for Jobs, Growth and Investment, Mr Jyrki Katainen, who announced this, called for the strengthening of co-operation and partnerships between the EU and Ghana to ensure a win-win situation, as well as accelerate the economic development and prosperity of their people.

Mr Katainen, who was speaking at the closing ceremony of the EU and Ghana Business Forum in Accra last Friday, said job creation was a key pillar for resolving unemployment challenges in Africa under the Africa-European Alliance for Sustainable Jobs launched in September last year.

The two-day summit, aimed at boosting private sector investment and stronger trade opportunities between Ghana and the EU for their mutual benefit, was held on the theme: “Boosting investments for sustainable jobs in Ghana.”

It attracted about 500 interested parties from the business community, top executives of local and international institutions, state agencies and the diplomatic corps.

“The business summit demonstrated the EU’s commitment to work in partnership with Ghana to accelerate socio-economic development,” Mr Katainen said, and stressed the resolve of the EU to support Ghana and other African nations to achieve their goals through innovations and trade.

He commended Ghana for being one of the fastest growing economies in sub-Saharan Africa, urging that the country must continue to diversify its economy with respect to manufacturing, agriculture and services to increase exports to the EU market to boost its foreign exchange earnings.

For sub-Saharan Africa to absorb the teeming unemployed graduates, he said, it must create about 18 million jobs each year.

To that end, Mr Katainen said, Africa must mobilise private sector investments to achieve that feat.

The Vice-President, Dr Mahamudu Bawumia, who was in attendance, said the government was pursuing integrated bauxite and aluminium industrialisation, as well as an iron and steel industry which would be a game-changer to the country’s industrial transformation.

The government was also pursuing a value addition programme through the One-district, One-factory initiative to process raw materials, with 70 per cent of the projects focusing on agricultural value addition, he explained.

In view of that, he said, the government had passed the Fiscal Responsibility Law which required that Ghana’s budget deficit did not exceed five per cent of Gross Domestic Product (GDP), noting that over the past two years, the major fiscal indicators had stabilised and were moving in the right direction.

He cited the impact of the Planting for Food and Jobs programme, which he said made for the supply of subsidised fertiliser, quality seedlings and extension services to farmers, resulting in increased food production, while the surplus food items were exported to neighbouring countries.

Dr Bawumia added that the government had also embarked on a digital programme in the various sectors of the economy to transform it and make it efficient.

He mentioned the digitisation of passport application, driver’s licence, the paperless port project, among other reforms, as some of the projects the government was pursuing, adding that “Ghana will be a preferred destination for many businesses and investors, especially with the coming into force of the Continental Free Trade Area Agreement”.

Touching on President Nana Addo Dankwa Akufo-Addo’s vision of a Ghana beyond aid, the Vice-President indicated that the partnership between Ghana and the EU would reinforce that relationship, stimulate economic growth and promote accountability and transparency.

He called for the strengthening of growth pillars with a sound macroeconomic environment and a vibrant financial sector, adding that EU investments in Ghana represented the largest foreign direct investment in the country, amounting to $300 million annually, and the biggest provider of development assistance of more than $500 million.