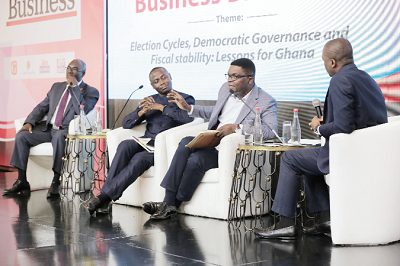 The Executive Director of the Institute for Democratic Governance (IDEG), Dr Emmanuel Akwetey, has called on political parties to focus on development issues instead of their over-concentration on how to win elections.

He said while the parties confined themselves to winning elections, development at the local level was most often neglected.

“In our case, the local areas have been close to parties not only in this Fourth Republic but since 1958. If you take parties out of local government, you have not given them space to develop their developmental capacity — how to think through the policies, how to solve the problems and their communication with the community,” he said.

He said the country had focused on elections, which had become increasingly expensive, so much so that an impression had been created that without elections, the system could not function.

“From the election perspective, we are not only dealing with fiscal policy because it’s government expenditure; we are now dealing with private investors in elections, a phenomenon which the parties are calling monetisation.

He said that was a new phenomenon to be considered by economists.

Dr Akwetey said ironically, although the parties had been blamed for the instability of the economy, they should be seen as the very organisations whose existence had enabled the country’s democracy to thrive.

“When the military proscribes parties, we lose our civil and political liberties. But parties must also do development, and for them to do so, we have to open the doors to local government,” he said.

Dr Akwetey said huge budget deficits that were recorded in election years were due to structural problems and not just the behaviour of governments,

He said such huge deficits created fiscal instability which often led the country to seek bailouts from the International Monetary Fund (IMF).

According to him, the design of the country’s democratic system made political parties focus on elections, a situation which he described as a “compelling election disease”.

“Election is money; you have to spend. There is some disconnect between this compelling election disease and managing the economy to ensure that fiscal stability is real and the macroeconomic stability that attracts investors is not toyed with,” he stated.

Dr Akwetey noted that the country went through that cycle every election year, resulting in the economy suffering some destabilisation, sometimes posing higher risks and with the whole nation on its knees in prayer for peace.

“So there is a problem with the way we design the system — elections, elections and it’s not getting any better,” he said.

The breakfast meeting was on the theme: “Election cycles, democratic governance and fiscal stability: Lessons for Ghana”.

The Senior Advisor to the Minister of Planning, Dr Kodjo Mensa Abrampah, advocated specific funding sources for projects to shift away from the current funding mix.

He said the co-mingling of funds for projects had, over the years, contributed to stalled projects and project cost overruns.

“It will be good to have a funding source identified for a particular project, so that once the fund is available, you start and you are able to complete, and, therefore, the problem that you come across with the overruns with respect to projects is avoided,” he said.

An Associate Professor of Economics at the University of Ghana Business School (UGBS), Prof. Eric Osei Assibey, said the key reason for the huge budget deficit during election years was the inability to mobilise enough domestic revenue.

“We don’t generate enough revenue and our tax effort is significantly low. There should be public education on the need to pay taxes and the local authorities need to be able to mobilise their own resources for development,” he said.

Organised by the Graphic Communications Group Limited, in partnership with Stanbic Bank, the breakfast meeting was to reflect on the cyclical election year spending by successive governments and recommend measures to halt that development to inform policy direction.

The Editor of the Graphic Business, Mr Theophilus Yartey, said the forum was timely and important to stir discussion on the subject, as well as come up with suggestions on how to address what had become a cyclical problem.