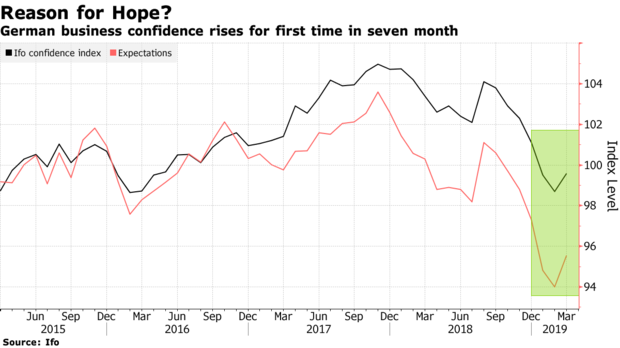 Confidence among German companies unexpectedly improved in March, providing a glimmer of hope for the European economy.

Ifo’s closely-watched index rose to 99.6, beating forecasts for a reading of 98.5, and a gauge of executives’ expectations also rose. The improvement helps to dispel some of the gloom after a survey on Friday showed German manufacturing in its deepest slump in more than six years.

The increase in the sentiment measure was the first in seven months. An improving mood among German businesses suggests Europe’s largest economy may be starting to find its footing after the Bundesbank all but gave up hopes for a turnaround this quarter.

“The Ifo index just sent a tentative signal of relief for the German economy,” said Carsten Brzeski, chief economist at ING Germany. “The solid domestic fundamentals, low-interest rates and a weak euro, still argue in favor of a rebound, mainly on the back of investments, consumption and some relief from the global risk factors.”

The euro-zone economy has been hit hard by rising trade protectionism and a slowdown in China, prompting the ECB to respond by promising to prolong record-low interest rates.

All six members of the Executive Board and a number of national central bank governors will speak this week. Top of the bill, President Mario Draghi and chief economist Peter Praet will address the ECB Watchers conference on Wednesday in Frankfurt. The event has served as a venue for officials to signal their policy intentions and their words will be scrutinized for any change in tone about the the outlook for the economy.

While the ECB slashed its growth forecast in March, policy makers expect growth to recover in the second half of the year. Their hope hinges on continued strength of the domestic economy, with falling unemployment and rising wages helping to cushion the blow from global uncertainties.

Draghi told European Union leaders last week that chances for a recession in the 19-nation region are still quite small despite “protracted weakness and pervasive uncertainty,” according to an official familiar with the discussion. The economy should also receive some relief from additional public spending that are set to provide the biggest boost in a decade.