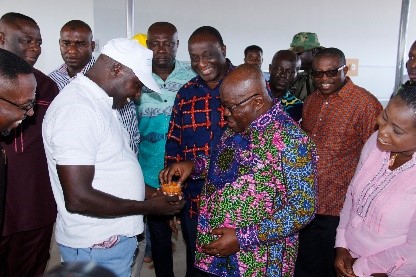 President Nana Addo Dankwa Akufo-Addo is hopeful that the new GH¢20million Sweet Potato Processing Factory under construction will transform rural communities in and around Gomoa Bewadze in the Gomoa West district of the Central Region.

The factory, to be operated by CASA de ROPA Limited – a wholly-owned Ghanaian private agribusiness company financed by the Ghana Export Import (EXIM) Bank – is yet to be completed and inaugurated.

However, the factory has started producing bread, chips, and other pastries from potato for local consumption.

President Akufo-Addo on tasting some of the chips, bread and other products which have been produced from sweet-potato during an official tour of the factory premises said: “It is indeed good and I love the taste. This is real a game-changer. This represents what I have been preaching about growing what we eat and eating what we grow. Government will offer all the support needed for this burgeoning industry to thrive”.

He emphasised that the potato industry could be a great game-changer if given the needed attention and resources; adding that government will continue empowerong the private sector to spearhead the provision of jobs and production of food for the local economy.

“The idea behind the One District, One Factory programme has been manifested here at CASA de ROPA: the provision of jobs and production of food for the consumption of the people. Government is on course to change the situation of the Ghanaian through this,” he said.

The Chief Executive Officer of CASA de ROPA, Mr. Ebenezer Obeng-Baffoe said: “The factory will be completed by end of this year. We are not waiting for the factory building to be completed before we start business. Our raw materials are in abundance here. We have cultivated close to 200 acres of potato. We have over 800 acres of land that we are still cultivating,” he said.

Mr. Obeng-Baffoe, in an interview with B&FT after the president’s factory-tour, explained that sweet-potato processing will soon be big business because of the health, economic and other benefits that it brings.

“It has vitamin A, which is very good for children and helps people who react negatively to artificial sugar. We do not add sugar to any of our products. The economic potentials are overwhelming.”

The Programmes and Innovation Manager of the factory, Mr. Joseph Okyere, told B&FT that the company is training and mentoring farmers to produce the right potato variety.

This, he indicated, will give significant economic benefits to the farmers and their families.

“The factory will provide 1004 direct jobs, but currently we have employed over 150 workers. The indirect jobs it will provide is unimaginable. Government’s purchasing power will be explored to generate additional market. The school feeding programme from primary school to secondary school, the prisons, hospitals and other institutions of the like wherein imported food items are served can be complemented by the numerous recipes from sweet-potatoes. The export market will be keenly looked into for both the fresh roots and the processed products,” he explained.

He added: “We are currently operating on a 500-acre farm, with over 100 acres currently under cultivation. We have also developed five dams to irrigate the farm, thereby ensuring all year farming.”

Mr. Okyere explained that the factory’s main raw material, Orange-Fleshed Sweet Potato (OFSP) – which was locally developed by the Crop Research Institute – is a special type of bio-fortified sweet potato that contains high levels of beta-carotene, and that the Beta-Carotene is an organic, red-orange pigment abundant in plants and fruits.

The OFSP is an ideal substitute to wheat flour. With most of our products using around 30 percent flour to 70 percent potato, wheat flour imports and the consequential impact on the local currency can be reduced significantly, thereby improving the strength of our currency.

The OFSP can be produced all year round. Its skin and leaves provide a good source of animal-feed.

“OFSP is one of healthiest foods in the world. It is known to be one of nature’s unsurpassed sources of beta-carotene. Several recent studies have shown the superior ability of sweet potatoes to raise our blood levels of vitamin A.

“And it is beneficial especially for children. Sweet potatoes contain a wealth of orange-hued carotenoid pigments. In countries throughout Africa, in India and in the Caribbean, sweet potatoes have been shown to be a highly effective way of providing school-age children with sizable amounts of their daily vitamin A,” he said.

The Technical Manager of the company, Mr. Tony Dawson-Amoah, explained the two dams at the farms will help the company produce potatoes all year round.

“We have outgrower schemes which are complementing the main farms that are here. We are in touch with other districts to get lands to put under cultivation,” he stated.

Sweet-potato has been identified as one of the key roots and tubers crops, and addresses malnutrition among children in the country with its high content of Vitamin A.

Sweet-potato, apart from being one of the starchy staples, is a source of carbohydrates and the new ones developed are very rich in beta carotene – a prerequisite for vitamin A, which is very good for children’s eyesight and nutrition.

Available statistics of the Ghana Health Service (GHS) indicate that 12,000 children in the country die every year from underweight-related ailments due to malnutrition.

The statistics also indicate that undernutrition contributes to about half of all child deaths beyond early infancy, and accounts for the death of one out of every thirteen children in the country who die before their fifth birthday.

Sweet-potato is a secondary crop because it complements the major root crops like cassava and yam, and has many positive attributes such as the production of more carbohydrate per unit area per unit.

Sweet-potato is the seventh most important food crop in the world; in developing countries it ranks fifth in terms of economic value of production, and among the tropical root-crops it is the second-most important after cassava.

In sub-Saharan Africa, where the crop is grown on some 13.37 million hectares of land, it is the third most important root-crop after cassava and yam.

Sweet-potato improvement programmes in Ghana over the last decade have focused on providing varieties that were drought, pest and disease tolerant.

The sweet-potato which is mainly cultivated in commercial quantities in all regions, except the Western Region, is mainly planted in pure stands. In the northern sector it is sometimes intercropped with yam or other crops. The crop is either planted in mounds or in ridges.

It was estimated that a total of 9,622 hectares of sweet potato was cultivated during the 2012 cropping season.

In 2009, a Root and Tuber Improvement and Marketing Programme (RTIMP) was implemented in about 26 District, Municipal and Metropolitan assemblies across the country, especially in the Northern part of the country.

The International Fund for Agricultural Development (IFAD), in collaboration with government, also jointly sponsored the project to help enhance food security and increase the incomes of roots and tubers farmers – thereby improving their livelihood development.