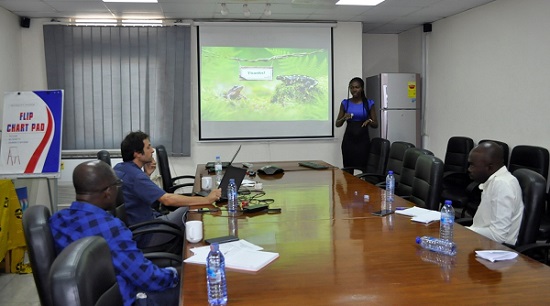 A member of the international jury of the ongoing Ghacem’s quarry life award competition, Mr. Stephane Riviere – who is also a Biodiversity and Natural Resources Expert-Global Environmental Sustainability at HeidelbergCement (HC Group), Germany – has paid a working visit to Ghacem.

Accompanied by Mr. Tobias Hartmann, Global Environmental Sustainability Corporate Social Responsibility Manager-HeidelbergCement, the visit among other things aimed at assessing the current rehabilitation and reclamation projects of Ghacem – and was also to assess/evaluate the projects of Ghana’s Top-6 finalists of the ongoing 4th edition of the quarry life award contest being organised by HC Group and have an interaction session with them.

He was impressed with Ghana (Ghacem), observing the level of responsiveness from stakeholders involved with running the competition has been high, as they have done a good job initiating the projects with good supervision and candidates are very clear in their approach, results and presentation “which has made our engagement and evaluation of projects very easy”, he said.

Mr. Riviere further explored very interesting topics with contestants from Ghana, which he noted are very relevant for the way Ghacem will engage further in Biodiversity conservation/restoration for the Quarries as well as engagement for the communities. He therefore urged candidates to establish clear guidelines, suggestions and recommendations in their final reports, so that Ghacem can make the most of it in terms of the added vale for itself and the way it can promote Biodiversity in Quarries and engagement with communities.

He wished Ghana/Africa well in the 4th edition of the QLA, and further urged participants to be clear in their recommendations and methodologies so they can be reused and repeated not only in Ghana but different countries for the objectives and benefits of Biodiversity to become clear.

Mr. Joseph Mensah, in an interview, emphasised the importance of the QLA for Ghacem and the entire HC Group – explaining that the interest it has generated among educational Institutions and the coming together of different projects for Biodiversity promotion “means as a company we will have a good source of information/database in our reclamation processes at our quarries”; and he also described the visit from the HeidelbergCement delegation as very positive, as it will give an international exposure and positive feedback to the participants for Ghana/Africa to have a winner for the first time.

The Quarry Life Award Campaign (QLA) is a global competition organised by HeidelbergCement (HC) Group to source ideas toward the effective regeneration and management of biodiversity in all its mining sites across the globe.

HeidelbergCement operates more than 100 cement grinding plants and over 1,000 quarries in more than 40 countries. Ghana, represented in this case by GHACEM, is part of HC Group subsidiary countries participating in the QLA competition.