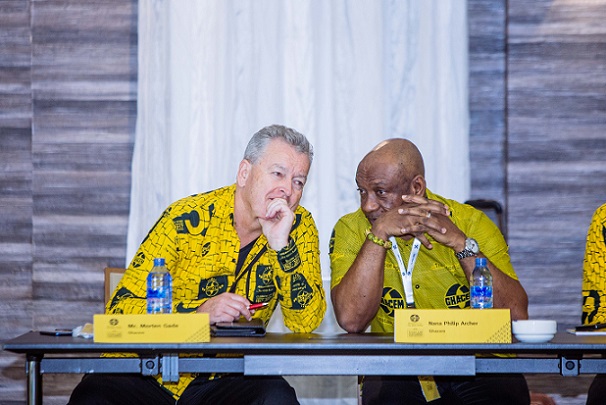 Leading cement manufacturer, GHACEM, has said the company is working to attain it’s three million tonnes production target by the end of the year.

This will propel the company to meet its set target of producing and distributing 60 million bags of cement in 2019, the Managing Director of GHACEM, Mr Morten Gade, has told the Daily Graphic.

“Strategically, what we are doing is to know the exact distribution chain. We are making sure that with every stage in the market from manufacturing to the distributors to the retailers and then to the end consumer, we know the market segment,” Mr Gade said after the company’s Customers Appreciation Dinner at the Marriott Hotel in Accra.

Although a challenge, he said, the company would this year ensure through strategic and innovative ways that it maintained its market position as the number one producer of cement in the country.

Last year, the company produced and distributed about 56 million bags of cement and hopes to increase the figure to 60 million at the end of the year.

“This will be more challenging in the present moment but we will be giving the customers something extra,” he said.

“When the market dynamics change, you have to change too so we changed our marketing efforts, we did things differently and we had a much better and closer cooperation with the distributors and our direct customers and we managed to maintain our market position and our market share despite two new competitors coming onto the market,” he said.

Asked what the company was going to do differently to ensure that distributors of the company remained loyal, he said “we always make sure that we have the best quality of cement on the market and we offer it at a very affordable price”.

On the competitiveness of the price of GHACEM cement against others on the market, he said, “if you buy a Rolls Royce or you should buy a TATA, you don’t expect to pay the same price.”

He said the biggest achievement of GHACEM all these years was its commitment to the development of the nation and not just the growth of the company’s core business.

“We have done more than just play the game as a cement producer, we have produced quality cement but at the same time we are also giving something back to the society in terms of taxes, port duties, giving to schools, giving to clinics and helping the needy in the society so that kind of balance in the corporate philosophy of GHACEM is one of our biggest achievements,” he said.

Chairman of the GHACEM foundation, Nana Prah Agyensaim VI, who was the chairmen for the occasion, encouraged distributors and direct customers of the company to remain committed to the course of the company and help it to grow.

He said the company had since distributed some 530,000 bags of cement to charity and that it would have been impossible without the commitment of the distributors and customers of the company.

“You are direct contributors of national development through GHACEM you have served a distinct role in the development of the nation,” he said.

With soothing music from the Touch Bay band, patrons of the event, made up of distributors of the company, as well as staff, were treated to a night of pleasantry with some of them receiving various awards for their loyal service and commitment to the company.

The best distributor prize was given to Mr Clement Effah who was full of praise for the GHACEM team.

In a short speech to show his appreciation for the award, he said, “Some 4 years ago I walked into the offices of GHACEM through the advice of my then Sales Representative, Joojo Essuman and met Benny Fiifi Eshun and his former senior colleague who led me to the Commercial Director Nana Philip Archer and my mission was to be part of the Ghacem family and fight hard to earn a place at the top of their team of hard working distributors,” he said.