Ghana, among fastest-growing economies in the world — Report 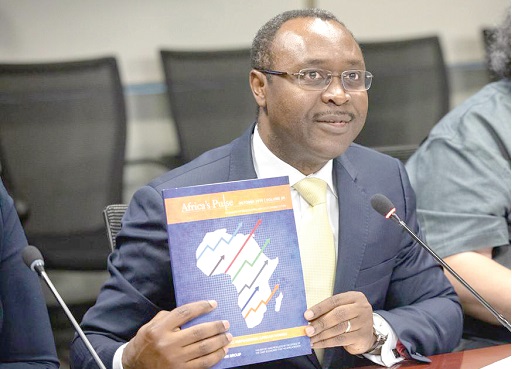 Ghana is among the fastest-growing economies in the world, a World Bank report has stated. The other countries are Ethiopia, Rwanda and Cote d’Ivoire.

The four countries, which are currently experiencing seven per cent economic growth, are also the four fastest-growing economies in Africa.

“Africa still hosts four of the fastest-growing economies in the world. Countries such as Ethiopia, Rwanda, Ghana and Cote d’Ivoire are still growing above seven per cent.

These countries are not only the growth champions on the continent but also among the fastest -growing economies in the world,” it added.

The Chief Economist for Africa at the World Bank, Dr Albert Zeufack, made this known in a live video conference streamed from Washington, DC, USA.

He was speaking at the launch of the 20th edition of the Africa Pulse Report, the World Bank’s twice-yearly economic update for sub-Saharan African.

The launch of the report, which focused on two special topics — Accelerating poverty reduction in Africa and empowering African women — coincided with the 10th anniversary of the report.

Dr Zeufack mentioned six other countries in Africa — Benin, Mauritania, Niger, Senegal, Uganda and Burkina Faso — which he said were growing above six per cent.

“So, overall, we do have 10 economies in Africa that are still growing above six per cent, but it is also important to highlight the three largest economies in Africa — Nigeria, South Africa and Angola — which are still having extreme difficulty recovering from the recession they experienced over the past two years.

“Excluding these three economies, the rest of Africa is growing around four per cent,” he said.

Dr Zeufack said the macroeconomic outlook growth in sub-Saharan Africa was projected at only 2.6 percent in 2019, and that for the next four consecutive years, average growth in the region would be below 3 percent.

Describing such growth as ‘anaemic’, the chief economist blamed the slow economic growth on three factors — deepening global trade tension, which he said was affecting the entire world; the slow pace of domestic reforms, especially in areas of debt management and inefficiency of public sector institutions, and climate shocks, such as the cyclone that affected Mozambique, Zimbabwe and Malawi.

He added that alternating cycles of drought and floods were also affecting the agricultural sector across the continent, saying: “All these are translating into export and investment, therefore, slowing down growth.”

“In a way, governments, firms and individuals are having difficulty creating jobs, which are so desperately needed for themselves or for their communities,” Dr Zeufack said.

He further said Africa currently had 460 million people living below $1.9 a day, representing 41 per cent of Africans, meaning that four out of every 10 Africans lived in extreme poverty.

“If we continue doing business as usual, extreme poverty will exclusively be an African phenomenon, with nearly 90 per cent of the world’s extremely poor living in Africa by 2030,” he cautioned.

Dr Zeufack said 82 per cent of the poor in Africa were in the rural areas where farmers lived in fragile conditions and, therefore, called for conscious efforts to tackle challenges in the agricultural sector to increase productivity for better livelihoods.

He said the situation was making the continent to lose out on potential workers, innovators and leaders simply because they were being left out of the economy.

To address the challenge, he suggested that African countries should focus on addressing incomes of the poor by resorting to the use of technology to increase agricultural productivity and also connecting farmers to markets.

“We must address the poverty financing gap through better tax compliance and more pro-poor spending, as well as focus on demography, as rapid population growth is certainly not making the fight against poverty easy,” Dr Zeufack added.