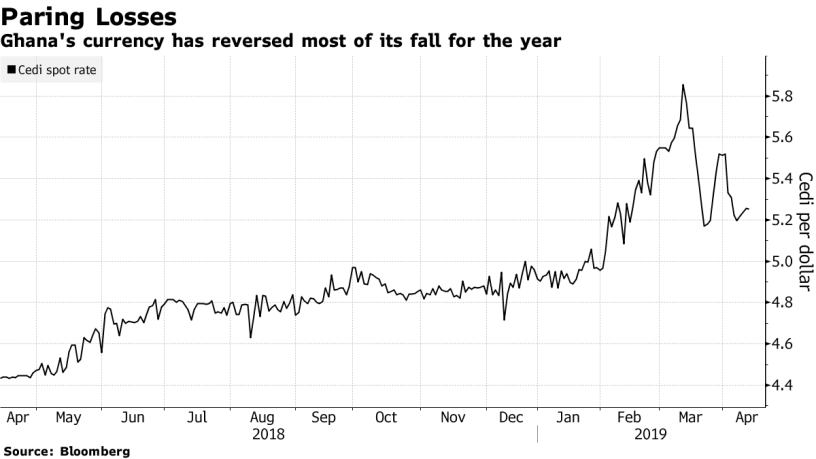 Ghana’s cedi has recovered to levels that appropriately reflect the state of the economy after “overshooting” during a slump in the first quarter, according to the head of the central bank.

The currency of West Africa’s second-biggest economy collapsed as much as 16 percent against the dollar after offshore holders of domestic debt failed to roll back their maturing investments at the same time as when the central bank was building reserves to meet targets under a program of the International Monetary Fund. The cedi pared its year-to-date losses to 6.4 percent, trading at 5.2513 against the greenback by the close in Accra on Thursday.

“We think that is probably where the fundamentals would say it should be,” Bank of Ghana Governor Ernest Addison said in an interview Thursday with Bloomberg Television in Washington. “The key thing to recognize is that the exchange rate will reflect the fundamentals of the Ghanaian economy, and we believe that the fundamentals are at the appropriate places.”

Since coming to power in January 2017, the government of President Nana Akufo-Addo has overseen accelerating economic growth as Ghana finalized a four-year IMF bailout program, which ended earlier this month. Over the same period, the central bank cut interest rates by 950 basis points as consumer-price growth eased to within the target band of 6 percent to 10 percent.
A surprise cut in January was informed by the U.S. Federal Reserve’s “more accommodative” stance, giving the Bank of Ghana “room to reduce the policy rate at home,” said Addison.

Further easing will hinge on the Monetary Policy Committee’s expectations for price growth, Addison said. “We are very cognizant of the need to stay focused on inflation.”

The central bank may start a review of the target band after elections which are due in December 2020, he said.
Ghana can’t “remain competitive having inflation rates of 8 percent when our trade partners have lower inflation of about 5 percent,” he said. That “creates problems for currency stability,” he said.