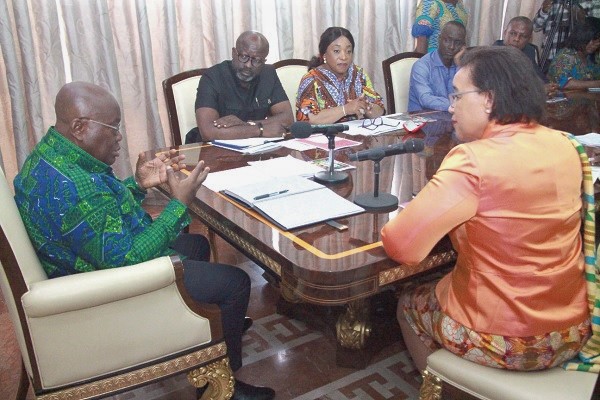 President Nana Addo Dankwa Akufo-Addo has said Ghana is committed to the Commonwealth of Nations’ values of freedom and respect for human rights.

He said as a strong and faithful member of the Commonwealth, Ghana had stood for those values because the organisation had a positive influence on humanity.

President Akufo-Addo said this when the Secretary General of the Commonwealth, Ms Patricia Scotland, paid a courtesy call on him at the Jubilee House in Accra yesterday.

Ms Scotland is in the country to attend a Commonwealth Youth Senior Officials’ (African Region) conference.

The Commonwealth of Nations, known as the Commonwealth, is a political association of 53 member states, nearly all of which were former territories of the former British Empire.

President Akufo-Addo described Ms Scotland as a distinguished professional who had made great achievements, and mentioned in particular, her interest in digitisation of countries, which Ghana was also pursuing.

He said the initiative, which dealt with data collection and analysis, was also helping in crafting the country’s development policies.

The President also said Ghana was a functioning democracy and a transparent society which attached importance to the values espoused by the Commonwealth.

President Akufo-Addo, who is also a Co-Chair of the Eminent Group of Advocates for the UN Sustainable Development Goals (SDGs), said Ghana was on course in the implementation of the set targets.

He said the private sector was also involved in financing the implementation of the SDGs through the creation of two sets of funding with the captains of industry playing critical roles.

On environmental sustainability, President Akufo-Addo said the Sahara,was spreading fast southwards and that efforts to halt the drift must be a matter of concern to all.

He said Ghana, as a coastal nation, had taken marine preservation seriously, in order to benefit from its resources to secure a healthy marine population, while at the same time, maintaining and developing it sustainably.

The President said it was worthy of note that the Commonwealth had some of the country’s environmental issues on its agenda and was prepared to offer support, including technical assistance, to help address them.

Ms Scotland commended President Akufo-Addo for his support to the Commonwealth and programmes he had initiated, especially, those bordering on finding solutions to challenges affecting the youth.

She also stressed the need for data collection and analysis to be taken seriously since it would help in the accelerated growth of developing countries.

Ms Scotland said a Commonwealth Innovation Hub had been launched to support in trade analytics and other sectors of the economy.

The Secretary General further said the organisation was using sports to attain peace and good governance.

Accordingly, she said, the Commonwealth had launched a programme, under which cricket would be used as a rallying point to mobilise dysfunctional young people to play the game in Australia, as part of efforts to bring people together and make a difference in their lives.