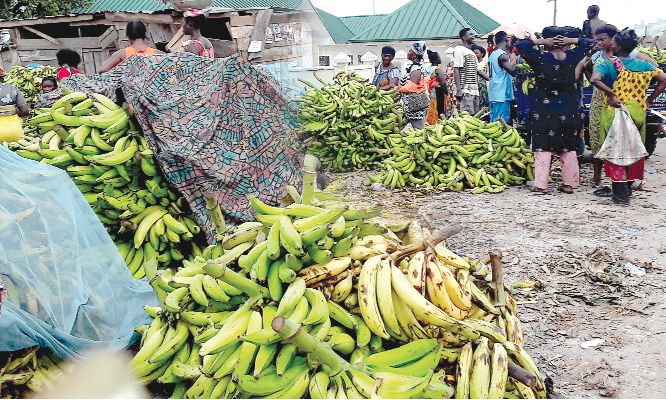 Ghana has begun the export of plantain to Burkina Faso and other countries in the West African sub-region.

The bumper harvest of plantain, the number three food crop in Ghana, after yam and cassava, has resulted in the export of the produce from Agogo and its environs to Burkina Faso, Togo, Benin and Cote d’Ivoire.

A visit by the Daily Graphic to Agogo revealed the booming plantain business going on there.

The good rains this year have accounted for a good yield of plantain, and especially in the Agogo area the curtailment of the menace of nomadic herdsmen has accounted for the good yield.

The activities of the nomadic herdsmen and their cattle in the past had constrained farmers in the Asante Akyem North District in the Ashanti Region from carrying out their farming activities.

The nomadic herdsmen, mostly armed, terrorised farmers, killed some of them and raped women, while their cattle destroyed the farms in areas such as Asante Akyem, Afram Plains and parts of the Volta Region.

The government’s intervention, by way of intensification of the “Operation Cowleg” and the establishment of ranches in the Afram Plains, resulted in nomadic herdsmen confining their cattle to the fodder banks.

Besides that, the construction of the 75-kilometre road from Agogo to Maame Krobo in the Afram Plains has encouraged many farmers to go into plantain farming on the plains, instead of the previous practice of farming only in the forest areas.

For instance, the Akyeamehene of Agogo, Nana Boakye Yiadom, told the Daily Graphic that hitherto, farmers were concentrating plantain cultivation in the forest areas, but through the instrumentality of the Omanhene of Agogo, Nana Akuoko Sarpong, who convinced them that plantain farming would be successful on the plains, they decided to give it a try.

That, he said, had opened up the road to the Afram Plains, saying that, incidentally, Nana Akuoko Sarpong personally introduced the Agogo people to the planting of plantain on the plains.

He said the construction of the road had opened the place for farming and it had now become a centre for the production of plantain.

He said Nana Akuoko Sarpong also convinced the people that there was no need to move to Accra, since they could stay at home and concentrate on farming in the area.

The Queenmother of plantain sellers in the Agogo area, Nana Akosua Tawiah, for her entrepreneurship spirit in the plantain business, recently won the Asantehene’s Best Woman Entrepreneur award. She has consequently gone ahead to put up a 48-bedroom apartment for the Presby University in Agogo.
“Agogo is now a booming town,” Nana Yiadom said.

Farmers in the Agogo area are now excited about the development, compelling them to find new markets for plantain outside Ghana to avoid a glut on the Ghanaian market.
For many years in the past, Ghana imported plantain from Cote d’Ivoire and vegetables from the Sahel region.

Although Ghana still imports tomatoes and onions from the Sahel region, officials of the Ministry of Food and Agriculture say moves are underway to end the importation.

Figures are not readily available on the quantity of plantain that has been exported to Burkina Faso, Togo, Cote d’Ivoire and other countries so far, but records in Agogo show that seven big trucks of plantain leave the town for Burkina Faso on a weekly basis.

According to a Food and Agriculture Organisation (FAO) survey in 2006, plantain contributed about 13.1 per cent of the agricultural gross domestic product (AGDP) and per capita annual consumption of 101.8kg per head in Ghana.

The plant belongs to the non-traditional sector of the rural economy, where it is used mainly to provide shade for cocoa. It is also an essential component of the diet and generates considerable employment.

Plantain traders have been facing security challenges while transporting plantain to Burkina Faso, for instance, as some of their vehicles get impounded on the way.

The bumper harvest has also created job opportunities for labourers and drivers who have found brisk business on Agogo market days.

The labourers, particularly women, sort the plantain and cut the bunches into single pieces to be packed into sacks for the local market, while the men load the bunches onto the trucks.

Tricycle riders, otherwise known as ‘aboboya’, are also having a field day, as they help in conveying the produce from the farms to the market or from the homes of the farmers to the marketplace.

The brisk business has prompted the Asante Akyem North District Security Council to liaise with the Ghanaian Embassy in Burkina Faso to facilitate the easy passage of Ghanaian trucks to Burkina Faso to enable the traders to ply their trade without any hindrance.

The Asante Akyem North District Coordinating Director, Mr Johnson Nyarko, told the Daily Graphic that even though it was the traders themselves who found the market for the produce, the assembly had to come in to streamline their activities and also solve the security problems they were facing.

According to him, the assembly had been able to group the traders in order to regulate and regularise their activities and also ensure the safety of their merchandise.

He said to regulate the market, two groups of traders had been formed and “they have a quota to export every week. If you are not a member of the group, there is no way you can export to Burkina Faso. You need to join a group”.

That, he said, had also enabled the assembly to have an idea about the quantity of plantain exported to Burkina Faso.

“And so far, with the agreement, everything is moving smoothly,” he said.

He, however, added that “this is not the first time the traders are exporting to Burkina Faso. They started this about four years ago but this year has seen an increase in the volume of the produce due to the bumper harvest as result of the good rains”.

Another contributory factor to the bumper harvest, according to him, was the success of the ‘Operation Cowleg’, which drove away close to 50,000 cattle, thereby ensuring that farmers had the freedom to attend to their farms and not suffer any attack from the herdsmen and their cattle.

One of the exporters, Ms Elisabeth Gyamfuaa, told the Daily Graphic that the Burkina Faso market had really provided them with an avenue to sell their produce, as the local market was becoming flooded with the produce.

Even though the Burkinabe market was also becoming flooded with the produce, she said, plantain still had a better price there than on the local market.

She said while in the past the traders there awaited the consignment with ready cash, “now we have to wait for them to finish selling before paying us to return home and we can spend close to a week there, depending on how fast the market moves”.

It was a different story for Akosua Pokuah from Accra. She said the abundance of plantain was making some of them run at a loss, as they were compelled to reduce the price to enable them to sell and stay in business.

Notwithstanding the losses, she said, one could not just sit idle and decide not to trade in it again “because we have a clientele to maintain and also bills to pay and there is no help coming from anywhere”.

One of the commercial farmers in Agogo, Issifu Azunga, told the Daily Graphic that even though his farm did not suffer the menace of the Fulani herdsmen, the success of Operation Cowleg was partly responsible for the bumper harvest being experienced this year.

Besides, he said, the climate of the area was also conducive for plantain farming and that the soil did not require fertiliser to produce the crops.

For Rose from Hwidiem, near Agogo, a peasant farmer, the activities of commercial farmers were greatly affecting the peasant farmers who did not have the resources to cultivate large tracts of land.

She said peasant farmers were not able to get good prices for their produce, as the commercial farmers had taken over the market and did not mind reducing the price.

She complained that even though the produce of peasant farmers was healthier and devoid of any chemicals, “we do not get the price the commercial farmers get for their produce. Now it is the buyer who determines the price. That is the dilemma in which we find ourselves”.