‘Ghana has made progress on SDGs’ 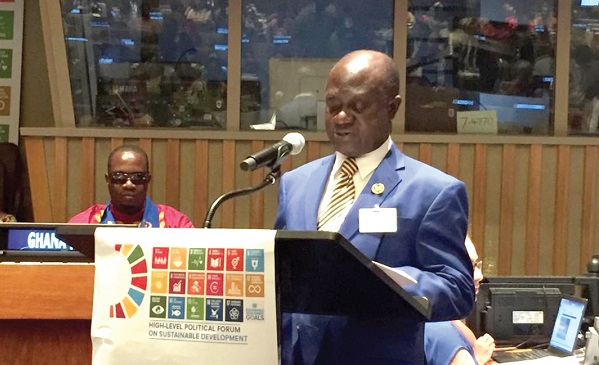 The Minister of Planning, Professor George Gyan-Baffour, has said Ghana has made progress on many of the Sustainable Development Goals (SDGs) of the United Nations.

He said overall, poverty declined marginally from 24.2 per cent in 2013 to 23.4 per cent in 2017, with growth in domestic productivity, measured in Gross Domestic Product (GDP), accelerating to 8.1 per cent in 2017, thereby making Ghana the second fastest growing economy in Africa in that year.

According to him, key macroeconomic indicators, including budget deficit, inflation and interest rates, were trending downwards, adding that trade balance recorded surpluses in 2017 and 2018, leading to an improved balance of payment position.

This was contained in Ghana’s first Voluntary National Review (VNR) report on the implementation of the 2030 Agenda for Sustainable Development presented at the 2019 High Level Political Forum (HLPF) at the United Nations (UN).

The forum forms part of the follow-up and review arrangement for the 2030 Agenda and provides a platform for reviewing progress of the implementation of the SDGs.

It is also aimed at providing a stage for mutual learning and forging of partnerships to accelerate the implementation of the SDGs.

The 2019 HLPF brought together over 2,000 participants from governments, businesses, academia, civil society organisations, youth groups, UN agencies, among others.

Touching on the social sector, Prof. Gyan-Baffour stated that access to education, especially at the senior high school (SHS) level, had generally improved.

He attributed that to the introduction of the government’s free SHS flagship initiative which resulted in an additional 271,000 students enrolling in SHSs in the 2017/18 and 2018/19 academic years.

Prof. Gyan-Baffour, who is also the Member of Parliament for Wenchi, added that gender parity had been achieved at the basic education level.
He said the proportion of the population with access to electricity had also improved from 70.6 per cent in 2013 to 81.1 per cent in 2017.

On the environment, he said there had been a marginal increase in the forest cover.

He said Ghana had commenced the implementation of a Forest Plantation Strategy, 2017-2040, to protect the forest cover to achieve the sustainable supply of planted forest goods and services.

The minister highlighted some important lessons learnt from the implementation of the SDGs, including the importance of developing strategic partnerships with key stakeholders; building strong linkages among the government, research institutions, academia, the private sector and other stakeholders for research and innovation; enhancing the capacity of sub-national structures for the effective implementation of the SDGs and mobilising adequate domestic resources to sustain and expand current interventions.

Prof. Gyan-Baffour, however, mentioned some of the challenges to achieving the SDGs to include lack of sustained financing.

According to him, improving domestic resource mobilisation and leveraging available resources from the private sector would be required to accelerate the implementation of priority interventions.

Addressing data challenges associated with the implementation of the 2030 Agenda, he said the government was implementing a data road map with three priority areas for action, filling data gaps, encouraging data use and strengthening the data ecosystem.

The uniqueness of Ghana’s efforts is that the government is delivering the SDGs through the joint effort of the CSOs Platform on the SDGs.
In the spirit of “leave no one behind”, the CSOs presentation was read by Mr Alexander Bankole Williams, a visually impaired person.

The CSOs Platform commended the government for its efforts and expressed its readiness for further collaborate to improve awareness creation on the SDGs.

Mr Williams emphasised the fact that “citizens’ awareness of SDGs was crucial because many of the SDGs can only be achieved through behavioural change”.

He also called on the government to help strengthen the capacity of CSOs in the area of efficient data collection, in view of the fact that the platform also produced complementary data for monitoring of progress on the SDGs.

Lack of awareness of SDGs

However, at a press conference in Accra, the CSOs Platform, in a report on Ghana’s progress on the SDGs, revealed that majority of Ghanaians were not aware of the SDGs.

Known as the ‘2019 Shadow Report’, it indicated that 57 percent of over 1,000 respondents randomly sampled said they had never heard about the SDGs, report Philip Boateng Kessie & Nicole Maafo.

It also said 56.4 percent of respondents said they did not also know whose responsibility it was to implement the SDGs.