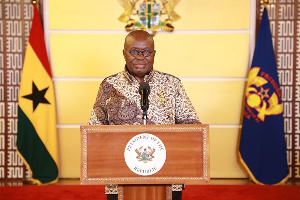 President Nana Addo Danwa Akufo-Addo has said discussions are ongoing between Finance Minister Ken Ofori Atta and officials of the World Bank to raise more funds to deal with the effect of the COVID-19 on the local economy.

Speaking during the May Day celebration in the studios of the Ghana Broadcasting Corporation (GBC), Friday May 1, Mr Akufo-Addo said: “Discussions are ongoing with the World Bank to raise more funds which should be completed soon.

“I have charged the Minister of Finance to work with the Bank of Ghana to design innovative policies and find more resources to strengthen the productive sectors of the economy particularly industry and agriculture. I understand that the process will shortly yield positive results.”

He added : “The Minister for Finance and his South African counterpart are leading the efforts of African ministers of finance to take debt reliefs for our economies.

“The World Bank has granted a debt repayment standstill for the next nine months which will result in our delayed principal interest payments totaling $500million.”

The president further said that job creations is a priority for his government.

“Job creation is one of the most priority of this government,” he said adding that it is a social contract with the people hence bold steps have been taken to that effect.