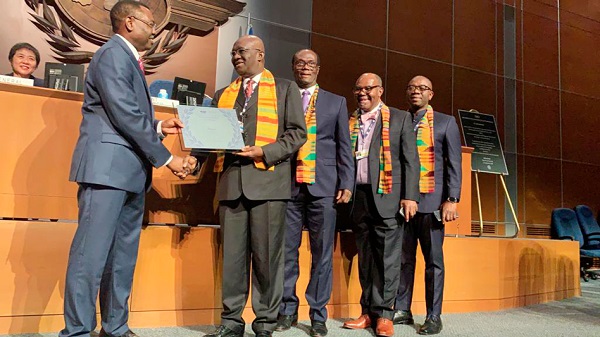 Ghana’s strides in the aviation industry received global recognition when last Tuesday the International Civil Aviation Organisation (ICAO) conferred two awards in security and safety on the country at the 40th Triennial Assembly of the United Nations Aviation Agency in Montreal, Canada.

The security award recognised Ghana’s progress in resolving aviation security and oversight deficiencies and the country’s commitment to the effective Implementation (EI) of its Standards and Recommended Practices (SARPS).

For the safety award, it was in recognition of the strides Ghana made in 2018 towards the resolution of safety oversight deficiencies and improvement in the EI of related ICAO SARPs.

In April this year, Ghana obtained an EI rate of 89.89 per cent, the highest by an African country, following the ICAO’s conclusion of its Coordinated Validation

The two awards, Ghana’s first since the ICAO Council established the Council President Certificates in 2015, were received by the Minister of Aviation, Mr Joseph Kofi Adda, who was joined by the High Commissioner of Ghana to Canada, Nii Ayikoi Otoo, the Director General of the Ghana Civil Aviation Authority (GCAA), Mr Simon Allotey, and the acting Managing Director of the Ghana Airports Company Limited (GACL), Mr Yaw Kwakwa.

The ICAO is a specialised agency of the United Nations created in 1944 to promote the safe and orderly development of international civil aviation.

In his opening remarks to the over 2,600 ministers, senior government officials and other industry stakeholders at the event, the President of the ICAO Council, Dr Olumuyiwa Benard Aliu, noted that “collectively, as aviation leaders, we have a very critical responsibility to ensure that there are sufficient numbers of skilled personnel to manage the increasingly complex technological foundation for 21st century aviation”.

Mr Adda expressed Ghana’s deepest appreciation to the ICAO for the awards and commended the GCAA and the GACL for their commitment to the continued ICAO compliance, adding that the recognition was a direct outcome of the numerous steps which the government had taken in support of the growth of the aviation industry.

Referring to aviation as the “new growth pole,” Mr Adda stressed that enhanced air connectivity and states’ economic development were inextricably linked, and urged greater collaboration between the ICAO and key players in the global air transport system in that regard.

He said the establishment of a home-based carrier, which is to ensure that Ghana remains on the global aviation map, was being pursued through a strategic partnership arrangement with an established airline which should be operational soon.

Turning to unmanned aircraft and the critical role they play in nations’ economic development, the Aviation Minister highlighted the excellent health outcomes that were being realised in Ghana following the implementation of a government policy to use drones to provide vital medical supplies to remote communities.

While acknowledging the remarkable progress made, Mr Adda reminded his audience that “at a time that ICAO recognises that Africa presents the highest potential for growth out of all of the UN aviation agency’s global regions, air connectivity in the continent should not be so poor that people travelling to parts of Africa have to fly into Europe to be able to connect flights into their final destinations back in Africa”.

“By the year 2022, when the next ICAO Assembly will have taken place, anyone flying from anywhere in Africa to everywhere in Africa should be able to do so within Africa in less than 24 hours, without leaving the African airspace,” he said.

The 40th Assembly, which will also elect the 36-Member Council of the ICAO and agree on the UN aviation agency’s work programme and budget for the next three years, will be concluded on October 4.