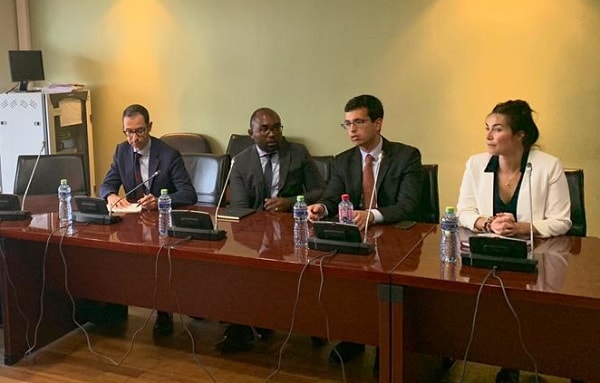 The International Monetary Fund (IMF) has given Ghana’s economy a clean bill of health.  According to the fund, Ghana’s economy remained stable and projected a seven per cent Gross Domestic Product (GDP) growth for 2019.

A team from the Breton Woods institution, led by Mr Carlo A.E. Sdralevich, which is in the country for Article IV Consultations, made the disclosure at a meeting with the Finance Committee of Parliament as part of its mission last Wednesday.

The discussions centred on macro-economic performance, revenue mobilisation, the financial sector clean up and matters bordering on the post-Extended Credit Facility (ECF) programme.

Mr Sdralevich noted that  the macro-economic situation in Ghana remained favourable and the projected GDP growth would be a reduction from the original 8.8 percent.

Nonetheless, he asked the government to be watchful about the country’s rising external debt.

Addressing the media after the meeting at Parliament House last Wednesday, the Chairman of the Finance Committee of Parliament, Dr Mark Assibey-Yeboah, disclosed that the IMF had been impressed with the management of the economy after Ghana’s three-year ECF programme with the fund.

“Inflation is now at 7.8 percent, and if you look at the trend over the past 13 months or so, it’s not expected to rise,” he said.

The 12-day Article IV Consultations, which end today, are part of the fund’s mandatory multilateral surveillance for all IMF-member countries.

They are the first Article IV Consultations since Ghana successfully concluded the four-year IMF-supported ECF programme in April.

The last IMF Article IV Consultations were held in 2017.

“IMF staff missions also often meet with some parliamentarians and representatives of business, labour and civil society. This is currently the stage we are engaged in with the IMF since Monday, September 30, 2019.”

“After these consultations, the IMF team reports its findings to IMF management and then present them to the Executive Board for discussion, which represents all of the IMF’s member countries. A summary of the board’s view is subsequently transmitted to the country’s government. In this, the views of the global community and the lessons of international experience are brought to bear on national policies,” it added.

Dr Assibey-Yeboah further disclosed that the IMF team also praised Ghana for the smooth nature in which it had undertaken the banking clean-up exercise.

“Regarding the banking sector clean-up, what I gathered from them was that the whole process had been smooth and it really amazed them,” he said.

“For you to resolve all these banks, microfinance institutions and savings and loans companies challenges within a short period and still have financial stability, those at the helm must be doing something fantastic. What they have achieved is amazing,” he added.

The Ranking Member of the Finance Committee, Mr Cassiel Ato Forson, told journalists after the meeting that the team raised both positive and negative issues.