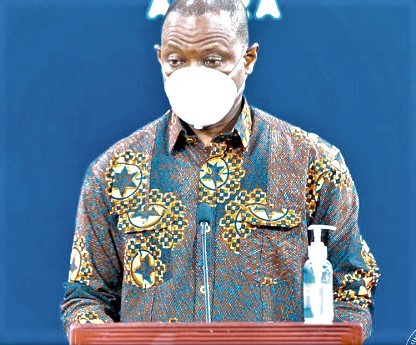 Four regions have been identified by the Ghana Health Service (GHA) as hotspots for COVID-19 infections.

They are the Greater Accra, Ashanti, Central and Volta regions.

The Director-General of the GHS, Dr Patrick Kuma-Aboagye, who gave a district-based analysis of Ghana’s situation, said: “In Greater Accra, the four main districts with majority of cases are the Accra and the Tema metropolises and the Klottey Korle and the Kpong Katamanso municipalities.”

Mr Kuma-Aboagye, who was speaking at the government’s bi-weekly briefing on the national COVID-19 situation in Accra yesterday, said the 26 other districts in the region which had recorded cases included Ablekuma, Okaikwei South, Okaikwei North, Ashiaman and Adenta, as well as Ga Central.

In Ashanti, he said, Obuasi was the hottest spot, with the other affected areas in the region being the Kumasi metropolis, the Oforikrom municipality, Nkawie, Old Tafo, Asokwa and Suame.

In the Central Region, Komenda-Edina-Eguafo-Abirem (KEEA), Cape Coast and Ajumako are the hotspots, he said.

Dr Kuma-Aboagye said the country recorded 427 new cases as of yesterday morning, with 272 coming from Obuasi, bringing Ghana’s total count to 5,127, from the 4,700 recorded in the last update.

According to him, Ghana’s active COVID-19 case count stood at 4,611, with 4,606 responding to treatment, while five were in critical condition.

He said 494 recoveries had been recorded, while 130 people were awaiting their second test results, after testing negative in the initial test, to determine whether they were virus-free or not.

He said there had so far been 22 mortalities, bringing the country’s fatality rate to 0.43 per cent.

Dr Kuma-Aboagye said part of activities in the next line of action was the identification of hotspots to put in place more enhanced response measures in those areas.

He said having identified workplaces as potential hotspots, it had become critical that extra attention was given to enforcing preventive protocols, such as physical distancing, cleaning and enforcing the ‘No mask, no entry’ policy.

The director-general appealed to residents of affected areas to be extra careful by adhering strictly to the protocols.