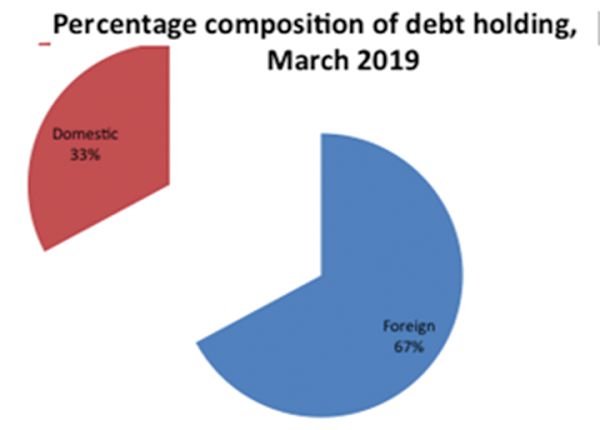 Bogged by the increasing size of the national debt in the hands of foreign investors and the implications on the economy, the Ministry of Finance is now contemplating capping the amount of domestic debts non-resident investors should be allowed to hold.

Two officials in the Treasury and Debt Management Division of the ministry, Messrs Henry Kyeremeh and Patrick Okyere Kwafo, told the GRAPHIC BUSINESS that the conversation around a cap on foreign participation in the domestic market was part of a bigger plan to deal with the country’s ‘stressful’ exposure to foreign investors through their holdings of the national debt stock.

They explained that the ministry was currently “thinking” of either linking non-resident investor holdings of the domestic debt to the country’s reserves or determining a threshold that their holdings must not exceed.

Once determined, they said the decision would then be put into a policy, making it compulsory for the ministry to comply in the marketing and sale of the domestic bonds.

They, however, explained that it was unlikely that the discussion would be concluded anytime soon for the policy to be operational before the end of the year.

“We really want to get it right and so we do not want to rush it,” Mr Kwafo, who heads the Bank Account, Reserves and Intervention unit of the Treasury and Debt Management Division of the ministry, said.

The two officials spoke to the paper on the sidelines of a debt advocacy meeting in Accra on July 4.

The programme was jointly organised by Grassroots Africa and the African Forum and Network on Debt and Development (AFRODAD) on the theme: ‘Interrogating Ghana’s debt management strategy: Lessons for West Africa States.’

It brought together parliamentarians, government officials and private sector stakeholders to deliberate on the state of the national debt stock and how to find sustainable solutions to the challenges it posed to the economy.

The Member of Parliament for the Bolgatanga Constituency, Mr Isaac Adongo, who presented a keynote address on ‘Ghana’s debt management – an observer’s view,’ said beyond the quantum of debt and the rate of accumulation which is of grave concern, “the composition of Ghana’s debt holdings also poses imminent risks to the balance of payments and external vulnerability.”

He said as of 2018, foreign investors held 30 per cent of domestic bonds.

“In addition to our external debt portfolio, about 64.88 per cent of Ghana’s entire public debt was in the hands of foreign investors as at the end of 2018.

“Within three months of 2019, this had worsened to 67.17 per cent,” he said, adding that Ghana now had “the highest external holding of domestic bond in any country in Africa.”

As a result of low prices on treasury bills, he said the Bank of Ghana was “sitting on sterilised funds of up to GH¢7 billion” at a time when government borrowing from the domestic market had recorded a shortfall of about GH¢4 billion.

“If you have foreigners also investing in the instruments, you gain the foreign exchange and that helps with your reserves,” he said but added that the ministry was determined to finding a lasting solution to the issue.

Mr Kyeremeh, an Economist at the Finance Ministry, said the issue was receiving the right attention.

“The discussion basically is to determine a threshold that guides us in the context of if foreigners are participating in your domestic market, at what point should they pull off; the level of exposure that you can take, especially with regards to your reserves.

“That is the threshold that we are trying to get so that we can put a policy on it,” he said.

“Afterwards, as they participate in your medium-to-long term instruments, you will be able to determine exactly your risk exposure so that in the event that they even pull off, the impact on your reserves and debt will not be that significant,” he added.