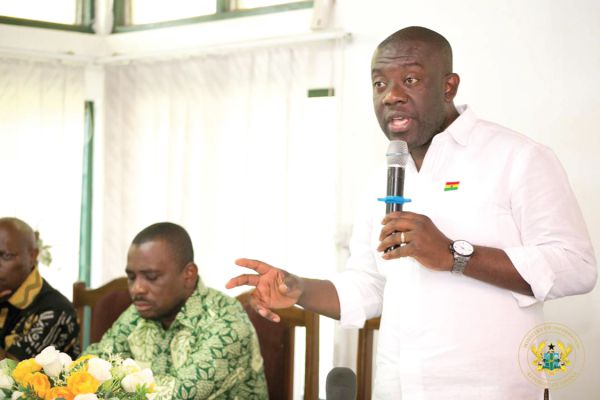 The Government has commenced engagements with cocoa farmers across the country as it seeks to strengthen ties with players in the cocoa sector.

The engagements began yesterday, at Akyem Tafo in the Eastern Region.

Similar engagements will continue in other cocoa growing districts in the Brong-Ahafo, Ashanti, Western and Central regions.

The government delegation is made up of the Minister of Information, Mr Kojo Oppong Nkrumah, the Deputy Minister of Food and Agriculture, Mr Kennedy Osei Nyarko, as well as officials from the Ghana Cocoa Board (COCOBOD).

Mr Nkrumah disclosed that the engagements would help the government to continually deepen its interactions with the cocoa sector.

“Cocoa is a major contributor to agriculture, job creation and GDP.

Farmers have over the decades been a major pillar in our national life.

It is therefore, important that we regularly engage with them to update them on what we are doing to help grow their industry,” he said.

Mr Nkrumah said the engagements were also meant to take feedback from the cocoa farmers on how government’s interventions in the sector were affecting them.

The chief cocoa farmers in selected districts in the Eastern Region, converged on the Cocoa Research Institute in Tafo to participate in the programme.

Mr Nyarko praised the cocoa farmers for their contribution to the growth of the economy.

“I urge you all to register with the government and benefit from the Planting for Food and Jobs programme and receive free improved seeds for your farming activities.

“President Akufo-Addo appreciates the contributions of farmers and will continue to invest in your welfare,” he told the cocoa farmers.