Government in talks with stakeholders to ease COVID-19 restrictions 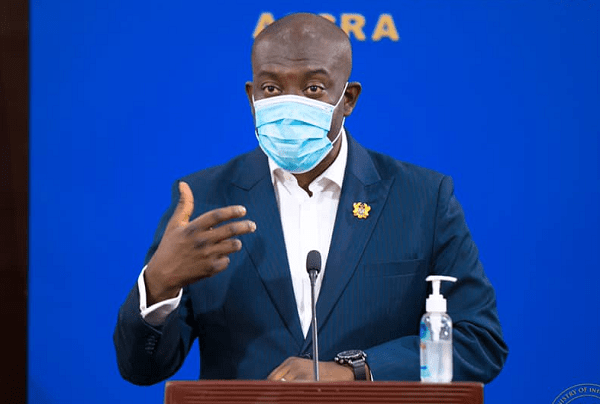 The Minister of Information, Mr Kojo Oppong-Nkrumah, has said government was in talks with various stakeholders to draw up and roll out post COVID-19 restriction measures to ensure the safety of citizens.

According to him, the Association of Ghana Industries (AGI), faith-based organisations, the sports community as well as stakeholders in the transport sector have presented various proposals to help government roll out post restriction measures.

President Akufo-Addo on March 15 imposed various restrictions as part of measures to control the spread of the Coronavirus disease.

The restrictions included a ban on social gatherings, closure of borders and schools and a partial lockdown of Accra, Kumasi and Kasoa.

The partial lockdown, which lasted three weeks, was however lifted on April 19, while the ban on social gatherings have been extended to the end of May.

Addressing the press on Thursday, Mr Oppong-Nkrumah said “government envisages that in the coming weeks it will need to outline a gradual plan for post restrictions era. Pursuant to this, the President has commenced engagements with various stakeholders on safety measures that can allow the easing of restrictions without compromising the health of the population.

“He has already engaged with the Association of Ghana Industries on potential measures for workplace safety. The industry has volunteered some measures which could be made mandatory at workplaces and these measures are currently under consideration.”

“The president has also commenced engagements with the education community on potential post restriction measures that will allow reopening of schools while protecting students, faculty and non-teaching staff,” he added.

While expressing appreciation to the various stakeholders, Mr Oppong-Nkrumah noted however that, “the fact that you are being engaged doesn’t mean that the proposals that have come from you have been accepted or that the restrictions have been amended or lifted currently.”

“Restrictions remain in full force and offenders will be arrested and prosecuted,” he said.

On his part, the Minister of Health, Mr Kwaku Agyeman-Manu, shot down calls for another lockdown, particularly in areas identified as hotspots for the disease.
He said “the lockdown is not something that we believe is going to work any longer. The lockdown taught us a lot of things and its impact is quite severe. So what we have to do now is to learn to live with the disease.”

Meanwhile, the Minister of Finance, Mr Ken Ofori-Atta has admitted that it was impossible for the government to have continued the partial lockdown imposed on Accra, Tema, Kasoa and Kumasi beyond the three weeks announced by President Akufo -Addo.
According to him, the Ghanaian economy, which is largely informal, could not sustain that decision beyond the three-weeks.

Speaking at an event at the Jubilee House, the Finance Minister said it was necessary to lift the lockdown.

“When you look at what happened during the lockdown. It was quite clear after a point that given the 90% of our population is informal and they go out each day to earn wages, it became increasingly impossible to continue with such a policy,” he said.