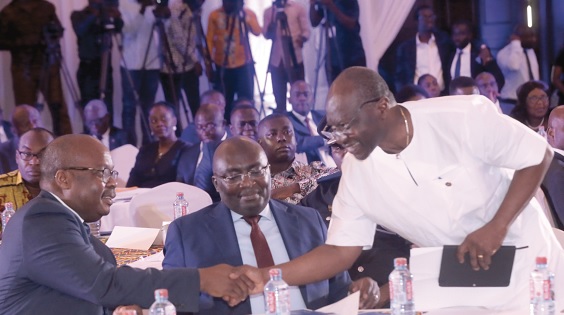 The GFIM is a market to facilitate the secondary trading of all fixed income securities and other securities to be determined from time to time.

The new guidelines spell out how financial institutions can derive funding, using the market for repurchase agreements or repos, to relieve funding pressure in the money markets.

As of August 2019, the stock of repos and reverse repos outstanding between the Bank of Ghana (BoG) and the commercial banks in Ghana was equivalent to $350 million.

Repos allow banks and other eligible counterparts to lend cash against eligible collateral.

The borrower absolutely transfers the collateral to the lender during the entire tenure of the transaction.

For traders and investors, a repo facility could support treasuries trading volumes and liquidity by offering more flexibility to banks to move between holding reserves and holding securities.

The GMRA, on the other hand, is a master agreement used globally and published by the International Capital Market Association and contains standard provisions suitable for the most common types of repo business (a form of short-term borrowing, mainly in government securities) and may be supplemented by market standard products or jurisdiction specific annexes.

With the launch, the Vice-President gave an assurance that next on the radar after the financial market reform would be the building of a robust regulatory framework of international standards.

He explained that that would serve as the anchor for an efficient financial market that served the needs of all market participants, manage price risk, ensure efficient flow of funds and develop resistance to shocks.

Dr Bawumia said ultimately, a robust regulatory framework of international standards would deepen the financial markets in Ghana by promoting a more vibrant and liquid secondary bonds market. It was also expected that the adoption of those guidelines would improve market transparency, liquidity and participation.

He explained that the recent strides made at improving the financial markets had been anchored on sustained economic growth, improved macroeconomic stability and the progressive financial sector reforms.

The Vice-President said the GMRA based on repurchase agreements would address some of the existing gaps in the financial markets and lead to the broadening of the scope of financial instruments and ultimately help deepen the market.

He explained that repos facilitated the liquidity of government debt markets, acting as a bridge between money markets and debt markets.

He said for the different market participants, repos could also serve as diversified products for their own liquidity management, albeit for some returns. However, like any financial product, there were inherent risks in their usage that required strict regulations to avoid abuse.

The Minister of Finance, Mr Ken Ofori-Atta, said the launch of the guidelines had come at a good time as Ghana positioned its economy to support the recently signed Africa Continental Free Trade Agreement, with the country hosting the secretariat.

He said the government believed that a well regulated and liquid financial sector would help achieve the strategic objective and push Ghana further beyond aid.

He added that a well regulated and improved repo market would provide market players with the much needed liquidity and temporarily convert liquid assets to cash to meet their financing needs.

The Governor of the BoG, Dr Ernest Addison, said a well-functioning repo market contributed to the efficient allocation of capital in the real economy by supporting liquidity and also offered several other benefits.

Those benefits, he said, included facilitating the flow of cash and securities in other financial markets and providing low risk options for cash investments, thereby supporting cash market efficiency and liquidity, transforming collateral and facilitating the purging of risk and fostering price discovery by facilitating primary market activity.