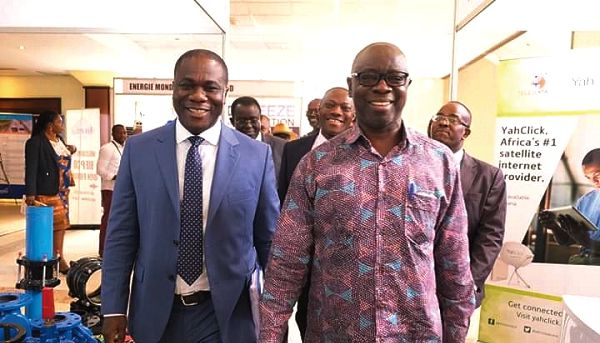 The Ministry of Lands and Natural Resources has begun an engagement with the Ghana Chamber of Mines and some mining companies to locally process 30 per cent of the gold mined in the country.

This is to tap into the synergies along the value chain of the mining industry to ensure that the state derives fair returns from the extractive sector.

The Minister of Lands and Natural Resources, Mr Kwaku Asomah-Cheremeh, said it was the government’s policy to add value to the country’s natural resources and urged multinational mining firms to help achieve that objective.

Speaking at the Annual General Meeting (AGM) of the Ghana Chamber of Mines in Accra last Friday, Mr Asomah-Cheremeh expressed the hope that the initiative would enhance Ghana’s reputation as a mining hub.

“I trust that our partnership with the chamber will facilitate pursuit of the best way to implement this initiative to further boost Ghana’s image as a credible mining destination,” the said.
He said the government appreciated the cooperation of the Chamber of Mines on matters affecting the mining industry.

“The ministry can attest to the periodic engagement with the chamber to iron out thorny issues and address concerns that can derail investor confidence in our mining space,” he said.

The periodic meetings, he said, were actionable platforms where decisions taken were to be effectively implemented to maintain Ghana’s position as a leading force in the mining business environment.

“I believe that many producing member companies of the chamber have shown that they are willing to voluntarily provide social investment in host communities to augment the work of the government.

“The effective complementality through the utilisation of the fund should reduce the acrimony between mining companies and their host communities and also the public suspicion that mining companies are milking the nation,” he said.

Mr Asomah-Cheremeh said the government had instituted many policies and strategies to grow the mining sector, key among them being enhancing good governance of the sector through transparent and effective utilisation of the revenue and making a deliberate effort to integrate the extractive sector into the economy.

Part of the policies and strategies, he said, was also to streamline the fiscal regime to make it appropriate and mutually beneficial for both investors and the host country.

“The implementation of such critical policies and strategies will help, in no small way, to provide the enabling environment for the mining sector to thrive even more,” he added.

The Chief Executive of the Ghana Chamber of Mines, Mr Sulemanu Koney, noted that the exceptional geological heritage of which the country boasted was indicative of the opportunities available to build a mining industry that was progressive and which could become a catalyst for development.

He, however, bemoaned the declining business climate, which he said had to be improved to reap the gains from the mining industry.

“Within the West African mining market, Ghana needs to play a catch up. The Africa Investment Index 2018 by Quantum Global ranks Ghana 16th on the ease of doing business, lagging behind Cote d’Ivoire, Burkina Faso and Senegal,” he said.

He said the chamber had, in a bid to improve the business climate in the mining industry, engaged stakeholders in the course of the year.

“The climax of the chamber’s engagement with stakeholders was the maiden interaction with members of the Economic Management Team, headed by the Vice-President, Dr Mahamudu Bawumia,” Mr Koney added.

The President of the chamber, Mr Eric Asubonteng, recounted some of the progress that had been made in the mining industry in the country, key among them being the upstaging of South Africa as the largest producer of gold in Africa.

“We must, however, note that the spate of widespread industrial unrest, controversial policy initiatives and a general hike in the cost of production occasioned a steep decline in South Africa’s production levels. This trend drove that country’s output to its lowest level in more than 10 years to 129.8 tonnes in 2018,” he said.

He said in 2018, mining companies returned 74.7 per cent of mineral export revenues through the commercial banks, meaning that $2.8 billion out of the realised export receipts of $3.8 billion was returned.

In addition to that, direct employment by mining companies in 2018 alone stood at 10,109, of which 9,950 were Ghanaians, he said, adding that the volume of income tax alone accruing to state from the employment figures was GH¢457.16 million.