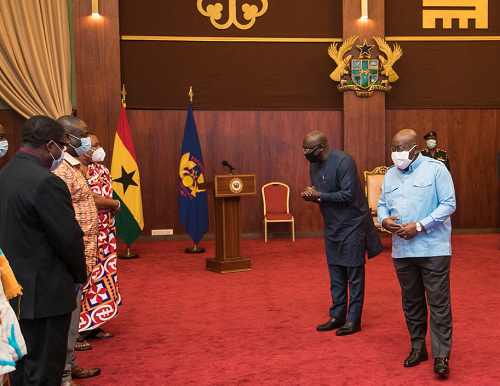 The government is determined to protect as many jobs as possible even as COVID-19 rages, President Nana Addo Dankwa Akufo-Addo has said.

“We are determined to protect as many jobs as possible and help as many businesses as possible get back on their feet”, he stated.

Out of the amount, GH¢600 million is coming from government coffers while commercial banks in the country also put together GH¢ 400 million.

In order to ensure a smooth application process for all eligible candidates, application forms have been made available online on the website of the NBSSI which is www.nbssi.gov.gh.

Applicants can also call the business call centre on 0302477777 or visit the nearest NBSSI business advisory centre in all the regions.

The scheme, which would be administered by the National Board for Small Scale Industries (NBSSI), has been grouped into two, namely Adom and Anyidaso.

Smaller enterprises can access funds from the Adom Micro Loan while larger ones can benefit from the Anyidaso Soft Loan.

Beneficiaries have a one-year moratorium and two years to pay the loans.

Touching on the beneficiaries, President Akufo-Addo said they would include MSMEs that required additional capital to expand their businesses to meet the growing demand for COVID-19 related goods and services, as well as those in food and beverages, technology, transportation, commerce, trade, health care and pharmaceuticals, and textiles and garments.

The sectors include agri and agri businesses, manufacturing, water and sanitation, and tourism.

He explained that they must be either self-employed, sole proprietors or engaged in a limited liability partnership or joint venture arrangements and that a total of 99 employees is the limited number of employment for any qualified enterprise.

He added that the qualified enterprises would be encouraged to belong to a trade association or group and be registered with the NBSSI.

He urged all beneficiaries to use the funds for the intended purposes so that together we can work to grow our economy once again.

President Akufo-Addo explained that the allocations would be supervised by a loans committee, consisting of one representative each of the Ministries of Trade, and Finance, a representative of the NBSSI and one from the participating banks.

He said KPMG would act as the technical advisors to the scheme and that disbursement to the fund would be effected through the participating banks. He stated that transparency and accountability would be the hallmarks of the operation of the scheme.

The President said COVID-19 had a devastating impact on all economies around the world and in Ghana it was seen in reduced productivity, job losses and a steep decline in revenue for the government, businesses, households and individuals.

He added that those who were hardest hit included MSMEs which accounted for 70 per cent of Ghana’s Gross Domestic Product (GDP) and represented 92 per cent of businesses in the country.

He explained that it was for that reason that the government was offering MSMEs such special attention.

President Akufo-Addo noted that the scheme was meant to engender compassion and hope, and that it would be one of the pillars on which Ghana would build a new post-COVID-19 nation, adding that “I am passionate about the scheme working”.

He said the government was investing a lot in it and was confident that with the proper application of the funds, it would help the country bounce back stronger and better than before.

He stated that the business support programme was an integral part of the resilience and recovery plan which was being instituted by the government to ensure the renewal of economic activities and sustenance of livelihoods.

President Akufo-Addo said the NBSSI had offices in 178 districts in the country and was well positioned to spearhead the management of the CAP Business Support Scheme.

The Minister of Finance, Mr Ken Ofori-Atta, said the fund was part of the governments’ efforts at putting the country’s economy on the path of sustainable growth and development.

He announced that the government had formed a taskforce to work on a recovery and stabilisation, and revitalisation programme which would concentrate on industry and manufacturing with specific focus on big businesses to spur growth, minimise job losses and ensure that the post-COVID recovery was at a faster pace.