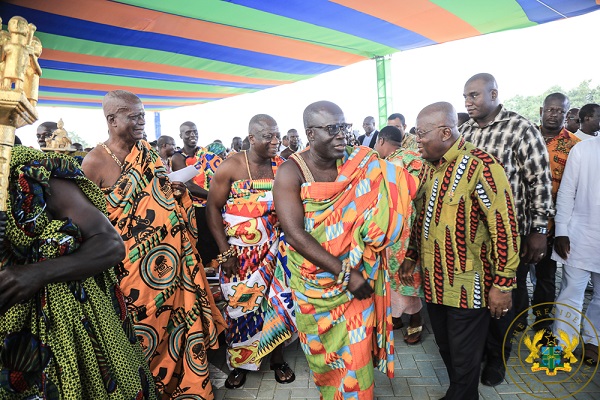 President Nana Addo Dankwa Akufo-Addo has given an assurance that the government will go to every length to protect local industries from unfair competition.

He referred to the establishment of the Ghana International Trade Commission (GITC) as a testament to the government’s resolve to deal with unfair competition in the system.

President Akufo-Addo was speaking during a visit to the Twyford Keda-Ghana Ceramics Company, manufacturers of ceramic floor and wall tiles, at Shama at the start of his two-day tour of the Western Region yesterday.

The factory is operating under the One-district, One-factory (1D1F) initiative.

He urged aggrieved local companies to lodge their complaints about any acts of unfair competition with the commission, so that the commissioner would be able to make recommendations to the government to address the issues.

President Akufo-Addo said his administration was on course to achieving the vision of a new Ghana anchored on industrialisation.

He said everything was being done to ensure that most of the things needed in the country were produced locally.
“We must begin to be an industrial nation,” he said, and urged industry players to join forces with the government to make the dream a reality.

The President commended the company for sourcing its raw materials — clay and kaolin — locally.

“Enhancement of our raw materials into value-added activities is exactly what the company is doing,” he said, and urged the management to continue to make full use of local materials.

Sadly, he said, most of the imported products were those that could be produced locally when the right structures were in place.

President Akufo-Addo said he was glad to note that Twyford Keda-Ghana Ceramics Company was also embarking on a vigorous export drive to cover the entire ECOWAS sub-region.

“With that, the concept of our country as the gateway to the ECOWAS sub-region is taking on more and more realities for our future.

“ Today, we are also hosting the secretariat of the continental trade area. What it means is that opportunities will be created for companies such as this not only to access the ECOWAS but the larger African continent,” he said.
With that, he said, industrialising the country would mean reaching out to a larger market of more than 1.2 billion people.

The President said the presence of the company in the country and its output underscored the economic cooperation that existed between Ghana and China, driven by mutual interest and values and very important for the development of Ghana.

As part of the day’s activities, the President also commissioned a state-of-the-art operational office complex of the Ghana National Gas Company.

The office complex is expected to deliver first-class gas operations and support services for the country’s gas sector, and also provide office accommodation for staff.

Whilst commending the Board and Management of Ghana Gas for overseeing the project, President Akufo-Addo also applauded the company for the numerous development projects it was undertaking in the Western Region, including the 10.5km asphalt road from Alla-Bokazo to Anokyi.

President Akufo-Addo noted that similar road projects had either been completed or were at various stages of completion in Axim, Half Assini and Kikam.

He gave an assurance that the Ministry of Agriculture, in collaboration with the Ghana National Gas Company, was currently working towards the establishment of a fertiliser plant in Jomoro. The Plant will use natural gas as feedstock to produce high quality ammonia, urea and fertiliser for both local and regional markets.

At the Twyford Keda-Ghana Ceramics Company, the Minister of Trade and Industry, Mr Alan Kyerematen, said the successful completion and commencement of production by the factory was a validation of the government’s drive to ensure one factory in each district.

“There could be no better testimony than what we are seeing here today of the validity of 1D1F. Can we imagine if all the districts in Ghana have something of this nature being built around the country? That is what 1D1F is all about,” he said.

The Managing Director of the company, Mr Li Wei, said to support local content, many Ghanaians were in key positions in the factory.

Mr Wei said the company was considering further investment to enable it to meet growing demands in Ghana and the sub-region, hence the need to transform the enclave into an industrial hub.