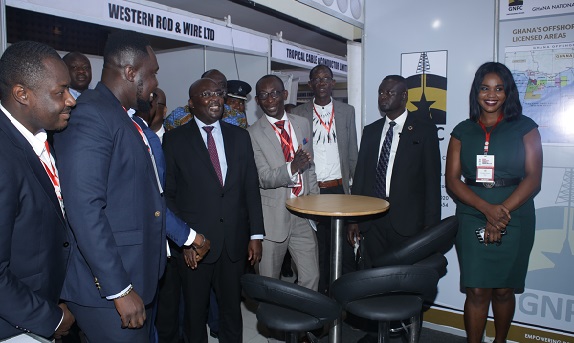 Vice-President Dr. Mahamudu Bawumia has made a strong defence of the country’s economy, saying strengthening the macroeconomic fundamentals is the primary goal of the government in the management of the economy.

He said the recent rating of the country by Standard and Poor, an international rating agency, from B- to a solid B was a confirmation that “we are building the fundamentals of this economy in the right direction”.

“Our commonly known macroeconomic indicators, such as inflation, interest and exchange rates may hover around, moving up and down, buffeted by occasional headwinds from domestic and external forces, but as all good sailors know, rough and turbulent seas are no indication that you are not steering well,” Dr Bawumia stated, pointing out that “we are not where we want to be but we believe that we are on course”.

He was addressing the opening of this year’s Ghana Industrial Summit and Exhibition in Accra yesterday.

The three-day summit, which forms part of activities marking the 60th anniversary of the Association of Ghana Industries (AGI), is on the theme: “International partnerships for value-added industrial and local content development”.

The summit, which is under the auspices of the Ministry of Trade and Industry and the AGI, has attracted exhibitors, as well as captains of industry, both foreign and domestic, in the energy, mining, construction and finance sectors.

Touching on specific indicators to buttress his point, the Vice-President said economic growth had more than doubled from its 2016 level of 3.7 per cent to 8.5 per cent as of 2017.

Agricultural growth, he said, was trending upwards, while industrial growth increased from a negative half per cent to 17.7 per cent at the end of 2017.

“Inflation continues to decline from 15.4 in 2016 to slightly below 10 per cent at 9.9 per cent; interest rates on 91-day treasury bills are also on the decline; our trade position has strengthened significantly and our gross international reserves now cover 3.9 months of imports, while the debt-to-Gross Domestic Product (GDP) ratio has declined from 73 per cent in 2016 to 64.4 per cent as of June this year,” he explained, and said the government was building a platform that could absorb the shocks.

Dr Bawumia stressed the need to engineer more savings in the economy to bring down interest rates.

Sharing a seven-point issue that he said was important to the government, Dr Bawumia said the government was focused on building a strong, resilient and capable economy, with the private sector as the engine of growth.

The points, he explained, were restoring and maintaining a sound macroeconomic environment, developing the human capital, matters of local content, finding solutions to the country’s energy challenges, the cost of credit, enhancing port efficiency and formalising the economy through digitisation.

On the government’s industrialisation drive, dubbed: One-district, One-factory, the Vice-President said the initiative was to enhance industrial activities in the country.

To that end, he said, the government had made some inroads at reviving the Volta Aluminium Company (VALCO), which is presently operating at 35 per cent with two potlines.

“We have another policy which is looking at the entire automobile industry, including Kantanka, which will also benefit from all the incentives,” he added.

For his part, the President of the Association of Ghana Industries (AGI), Dr Yaw Adu-Gyamfi, said the summit had, since its introduction six years ago, made inputs into the local content law for the oil and gas sector.

He painted a disappointing picture of the country’s manufacturing sector, which he said had led to a fall in GDP since 2017, and called for a clear national strategy by incorporating the One-district, One-factory initiative and others to drive the industrialisation agenda.

Dr Adu Gyamfi lauded the introduction of the Cargo Tracking System at the country’s ports, so long as it did not come with additional costs, and urged the government not to back-track on its implementation.

The AGI President stressed the readiness of the association to work with the government and also collaborate with foreign partners in the quest to promote the productive sectors of the economy to expand and create jobs to move the country beyond aid.